Browse: Home   /   Arts and Entertainment   /   Impractical Jokers Cast Brings Stand Up Back to Michigan in February 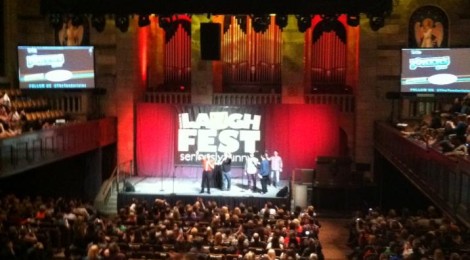 Impractical Jokers Cast Brings Stand Up Back to Michigan in February

I am pleased to say I had the privilege of seeing the cast of Impractical Jokers, or The Tenderloins as they’re known outside of the show, the last time they were in the Mitten State. The funny quad came to Fountain Street Church in Grand Rapids as part of 2014’s Gilda’s LaughFest. For those in Michigan who missed that show or any fans of the show, you should block your calendar off for either February 21st or 22nd when the group returns to the state.

The Tenderloins, as they’re known outside of the show, will perform at the Royal Oak Music Theatre on February 21st and 22nd with a total of three shows. What’s in a show on the “Where’s Larry Tour”? Well if it’s anything like the last one I saw, a load of laughs. The group gets intimate with details of their friendship, pranks that were too racy to air, and shows early clips and unaired clips to those in the audience. In fact, the group showed moments from the unaired season the last time around.

Season four of Impractical Jokers will premiere on TruTV January 29th. The new season will be 26 episodes. Due to the overwhelming success of the show, a one hour special that was shot during the last comedy tour will air March 26th. The show continues to put up impressive numbers as a top five ranked program among young adults. The show is averaging well over one million viewers and saw its season three figures up substantially to the prior season. The success of the show also helped the group get their spinoff show Jokers Wild greenlit for six episodes.

If you’re not familiar with the show, each episode follows four high school friends who essentially play pranks on each other and make each other say and do stupid stuff. The group consists of Brian Quinn (Q), James Murray (Mur), Joseph Gatto (Joe), and Salvatore Vulcano (Sal). The hidden camera show is the result of a friendship from high school.

So if you have a chance to check out the group in person, don’t miss out as you won’t regret it. Tickets are $32.50 to $37.50 and will have you laughing out loud. If you don’t have a chance to make it to Royal Oak, be ready to tune in or set your DVR for Impractical Jokers season four beginning January 29th.

(Picture is from LaughFest last year)

(Figures on the show come from TVbythenumbers.com)