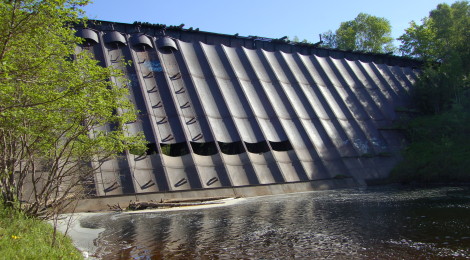 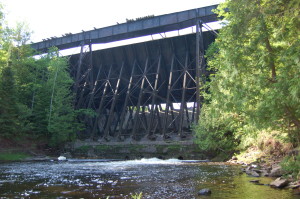 On our trip back to the stamp mill ruins at Freda in June of 2014, we also came across a historic steel dam on the way there. The Redridge Steel Dam was constructed in 1901, and is believed to be one of only three such dams in the entire country. There is also a smaller dam made of wood upstream that was the predecessor to the steel dam and is now visible since holes have been cut in the steel dam so it no longer retains water. 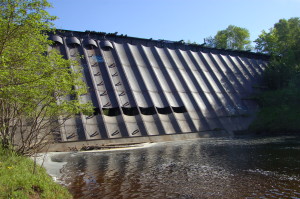 The steel dam was used by two mines in the area to make a reservoir that they could use in their operations. It is more than 1,000 feet across and over 70 feet tall in the middle. There are a few footpaths that lead from the small parking area to the river and others that lead up behind the dam for a view from the back and a look at the old wooden dam. 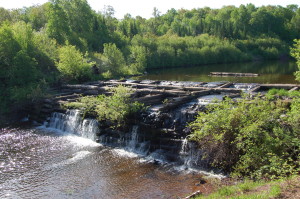 This was a pretty awesome site to find, and it’s in a pretty remote and unpopulated area. Only three steel dams were ever built in the United States, and only Redridge and the Ashfork-Bainbridge Steel Dam in Arizona survive. The Hauser Lake Dam in Montana was built in 1907, but only survived for one year. Thinking about the years of history while walking around this site with no one else in sight was pretty cool. The dam is located on the Salmon Trout River and can be reached from a parking area off of S-554 (Liminga Rd.) in Stanton Twp. 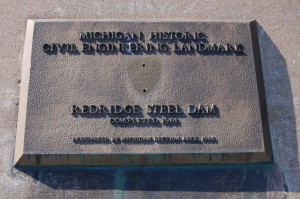 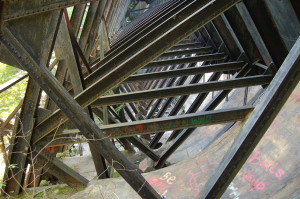 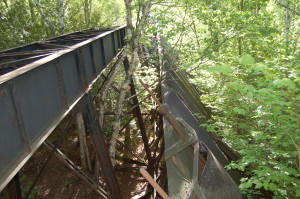