Marquette County is home to more than 20 waterfalls, and one of the most spectacular collections can be found near the Dead River in Marquette. The river drops multiple times before it is stopped by a dam used for hydroelectric power. A trail and signs are in place to help guide visitors to the falls, and while the hike to reach all of the falls here isn’t an easy one, the reward is more than worth it.

There is a small parking lot near the dam, and the trail to the falls begins off to the right. Shortly in to the hike and as the path begins its climb uphill, there is this nice woodcarving sign seen above. After maybe a quarter mile of hiking uphill there will be another sign pointing into the woods and this set of stairs descending to the falls area:

The lower set of falls is nice but not anything too impressive – the river falls maybe five to eight feet here in several tiers and it is split into two sides before its final drop. After that the river appears incredibly calm. Getting to the rest of the falls will take some work – look for a path that continues on past these lower falls and heads west to where a small stream intersects with the river. You will have to cross the stream and pick up the “path” on the other side, so this is the first of many spots where weather conditions will play a factor in your visit. The path on the other side of the stream is well-worn enough that it is easy to follow, although it does get quite steep in places. Go slow, use caution and watch your step as you proceed to the next set of drops.

The falls on the left at this next section are similar to the lower falls, another five foot drop over rocks. We found this to be an incredibly beautiful spot in the fall, as the colors of leaves on the fallen trees proved a great contrast to the lacy white cascading water.

Off to the right is a stronger waterfall that forces its way through a three-foot wide gap before plunging down six to seven feet. This would be a pretty impressive set of falls in other parts of the state, but things will only get better here.

The next falls is an eight to ten foot drop that looks like it could be twenty feet wide in periods of high water. Fallen trees had forced it into two sections when we were there.

The fourth major drop in the river is one of the most impressive, about 15 feet tall and plunging into a pool before the river bends around a corner. There are many opportunities here to get close to the falls by wandering around on the rocks – but be sure to use caution if they appear wet.

Above this waterfall there are several other drops of various heights, like the one shown above and the smaller one shown below:

After another five minutes of hiking, the river bends again and leads to this waterfall that forces its way over rocks as it falls around five feet.

Finally, there is one more major drop upstream as the river forces its way into a small canyon. This drop is 20-25 feet and the hardest one to get close to. The river above this thundering cascade is calm and forms a wide pool. We didn’t go on past here but I have since found out there may be one more major drop after this.

We had a blast visiting this area last October, and were very impressed to discover all of the upper falls. When we first visited the area back in 1998, we had stopped at the lower falls but had not explored any further. On a return visit in 2008 we were able to see that there were more falls upriver but were kept from exploring due to wet conditions. Below is a look at the trail conditions when we visited most recently:

A return trip over the Memorial Day weekend in 2019 did not disappoint. Due to some recent rainfall, all of the drops here were flowing better than we had ever seen: 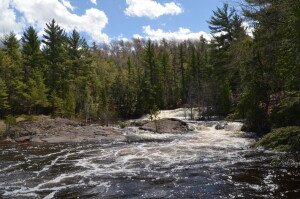 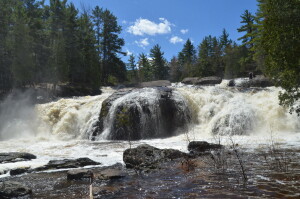 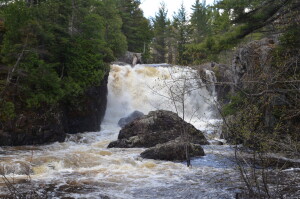 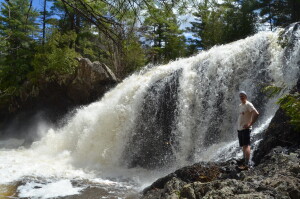 Directions: From M-28 in Marquette take Wright St. north a little over a mile and watch for Forestville Rd. on the left. Turn here and follow this road to its end at the parking area. You will pass the smaller Reany Falls on your drive in – if you want to visit them walk back on the road about 500 feet and look off to the left.