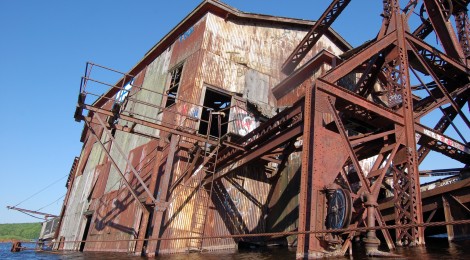 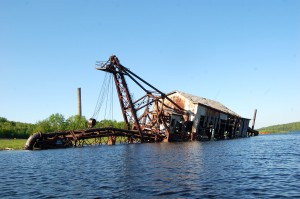 One of the most recognizable remnants of Michigan’s mining history in the Keweenaw is the Quincy Dredge Number Two, which is easily seen when driving on M-26 between Hancock and Hubbell. The dredge was constructed to reclaim stamp sand for more processing, which was quite an improvement in mining technology at the time. The history of this dredge dates back to 1914 when it was built for the Calumet and Hecla Mining Company. It was then known as Calumet and Hecla Dredge Number One and was used at a reclamation plant in Lake Linden. The dredge was sold to the Quincy Mine in the 1950s, where it joined their dredge and was renamed as Quincy Dredge Number Two. In regular use until the late 1960s, it sank during winter lay-up and the Quincy reclamation plant was closed soon after. 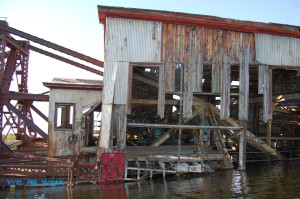 More information about the dredge can be found on Keweenaw history sites like Copper Country Explorer: “It could process over 10,000 tons of sand per day. Built in 1913, it has a 141′ suction pipe that could work 115 feet below water.” The vessel has a steel hull measuring 110 feet long, 56 feet wide, and nine feet deep. The decking overhangs the hull by eight feet per side, giving an overall width of 72 feet. 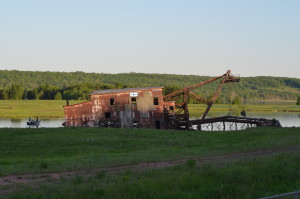 For many years, the dredge has fascinated us as we drove past, yet a large fence prevented closer exploration and photography. This year we brought our kayaks along, launched at Hubbell Park, and made the paddle along the shoreline out to the dredge. Along the way we passed the ruins of the Tamarack Stamp Mill and the old dock and smoke stack that were part of the Quincy Mill. Seeing the dredge up close was amazing, though it is in a very serious state of disrepair and has been a frequent target of graffiti. We hope you enjoy the pictures from our trip! 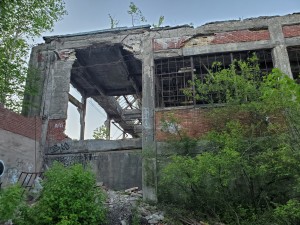 To see the dredge from land, pull into the parking area off of M-26 in Mason by the Quincy Mill ruins shown above and shown on the map below. It’s almost impossible to miss the Quincy Dredge Number Two when driving by!