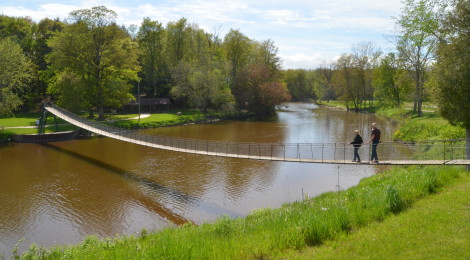 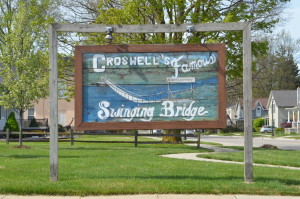 Many small towns and cities in Michigan have an iconic landmark that they are known for. In Croswell, a city with 2,400 residents in Sanilac County, the Croswell Swinging Bridge is that landmark. This suspension footbridge is more than 100 years old but still stands over the Black River and continues to be a draw for both locals and visitors. We recently had the chance to visit this iconic bridge and walk across it, this is a stop we recommend to every Michigan traveler!

The bridge is most commonly visited from Riverbend Park, which has a playground, disc golf course, and great spots to launch kayaks for a trip on the Black River. The bridge is the centerpiece of the annual Croswell Swinging Bridge Festival/Pioneer Days Festival, which features kayak and canoe race, cardboard boat races, parades, fireworks, live entertainment, and more. 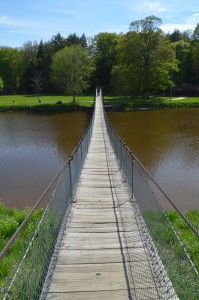 A plaque on a rock near the east end of the bridge reads: “This suspension footbridge over the Black River was built in 1905 using cables provided by Michigan Sugar Company. It was constructed to provide convenient access to the popular River Bend Park from the east and as a more direct route for workers to reach their jobs at the sawmill and sugar factory east of the river. Initially, the bridge consisted of two cables with boards attached. Two additional cables and fencing were added later to add handrails and stabilize the bridge, significantly upgrading safety (although the name Swinging Bridge is still descriptive). For many years, a sign at the west entrance to the bridge admonished, “Love Ye One Another;” similarly, a sign at the east entrance reads “Be Good To Your Mother-In-Law.” The Croswell Swinging Bridge has the distinction of being the longest suspension footbridge in Michigan.” 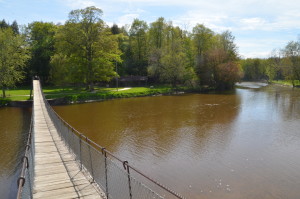 To find the Croswell Swinging Bridge, head west on M-90 from Lexington. Travel a few miles, then head north on Howard St. From there you can either turn left on Sanborn, cross the river, then head north on Nims St. and follow it to its end. The other parking area for the bridge can be found off of Maple St., a block west of its intersection with Howard St. (look for the sign at the top of the post).