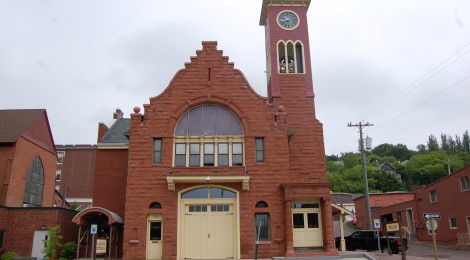 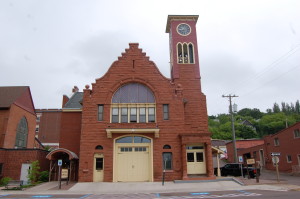 Many buildings in Houghton County still reflect how prosperous the area was when mining was king at the end of the 19th century. One of the easiest to spot on US-41 in Hancock after crossing the Portage Lake Lift Bridge is the Hancock Town Hall and Fire Hall, a towering building of red sandstone that has been honored as a Michigan State Historic Site and added to the National Register of Historic Places. 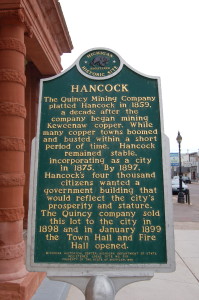 A two-sided Michigan historical marker on site speaks to the various architectural influences on the building, as well as the functions it once served for the community. The opposite side give a little history of the town of Hancock itself, as well as the Quincy Mine.

The Quincy Mining Company platted Hancock in 1859, a decade after the company began mining Keweenaw copper. While many copper towns boomed and busted within a short period of time, Hancock remained stable, incorporating as a city in 1875. By 1897, Hancock’s four thousand citizens wanted a government building that would reflect the city’s prosperity and stature. The Quincy Company sold this lot to the city in 1898 and in January 1899 the Town Hall and Fire Hall opened.

The Marquette firm of Charlton, Gilbert and Demar designed Hancock’s Town Hall and Fire Hall. Completed in 1899, the building housed city offices, the fire department, and the marshall’s office and the jail. Built of Jacobsville sandstone with stepped and curved gables, it exhibits Richardsonian Romanesque, Dutch and Flemish influences. The building is listed in the National register of Historic Places.