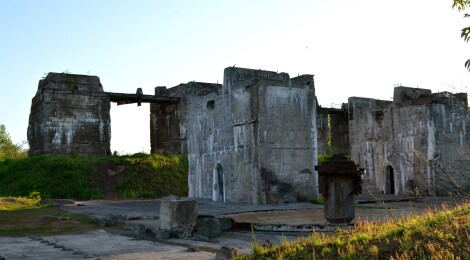 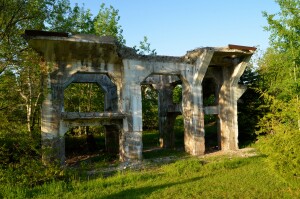 Michigan’s Keweenaw Peninsula has many mining ruins and remnants that remain from a time when copper was king, and one of the easiest to visit locations is the Ahmeek Stamp Mill Ruins in Tamarack City. The tall metal top of the Allis Steam Stamp is hard to miss when driving past on M-26 between Dollar Bay and Lake Linden. We had driven past many times but had never really stopped to explore the site. This summer after our kayak trip out to the Quincy Dredge, we finally stopped by to check things out and take some pictures. 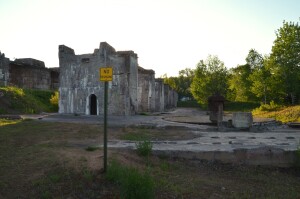 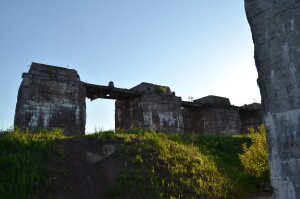 The ruins of the Ahmeek Stamp Mill are right next to Tamarack Park, where you’re likely to find local kids playing on the playground and basketball court in the summer months. We didn’t find much in the way of interpretive signage here to let us know about the mill’s history; there are multiple “No Trespassing” signs that restrict access to the site to the perimeter. 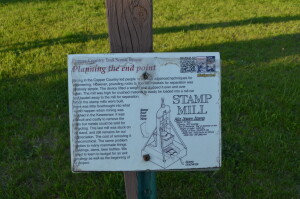 The only sign we found was one placed by Michigan Tech University at some point (similar to ones at the nearby Hungarian Falls). It has a detailed drawing of the Allis Steam Stamp and gives some historical background: “Mining in the Copper Country led people to develop advanced techniques for engineering. However, pounding rocks to liberate minerals for separation was relatively simple. The device lifted a weight and dropped it over and over again.” It also uses the mining industry in the area as a bit of a cautionary tale: “When the stamp mills were built, there was little forethought into what would happen when mining was finished in the Keweenaw. It was difficult and costly to remove the mills but metals could be sold for recycling. This last mill was stuck on its stand, and still remains for our appreciation.” 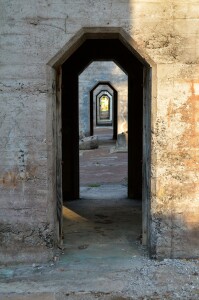 I had a lot of fun exploring the ruins here, and photographing the “never-ending doorway” above was great. The Keweenaw has more than a handful of these sites preserved for their history, and this was yet another place where we wondered what things had looked like at the peak of industry. 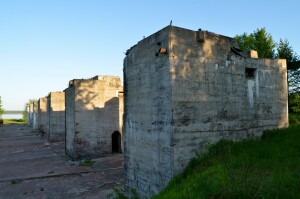 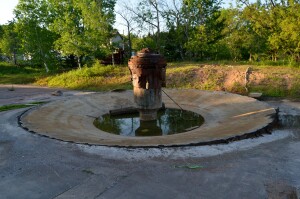 If you’re looking for more information on sites like this, including detailed maps, we’d encourage you to check out the amazing work being done over at Copper Country Explorer (https://www.facebook.com/CopperCountryExplorer/). The next time you drive through the Copper Country, consider a quick stop here to see the Ahmeek Stamp Mill Ruins.