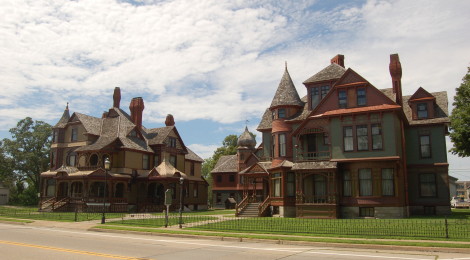 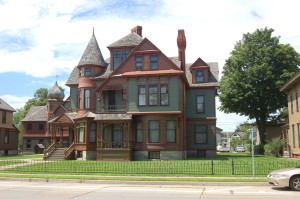 Two of the most stunning and well-preserved examples of Queen Anne style homes built in Musekgon, Michigan during the heyday of the lumber industry are the houses at the Hackley and Hume historic site on West Webster Ave. These two colorful historic homes are hard to miss and have been restored to their 1890s appearance and are open on select dates as part of the Lakeshore Museum Center. Find out more about hours and fees at http://www.lakeshoremuseum.org/project/hackley-hume/. Today we’ll take a look at these two stunning homes, as well as what we are able to learn about them and the two men who owned them thanks to the Michigan historical markers on site. 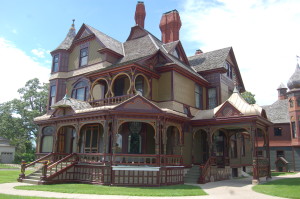 The Hackley House was built in the late 1880s at a time when Charles H. Hackley was incredibly wealthy thanks to the success of his lumber mill: “This three-story wood-frame building is one of Michigan’s most splendid examples of Queen Anne architecture. With the juxtaposition of masses created by roof lines, chimneys, tower and porte-cochere it has become a symbol of Muskegon. Fifteen stained-glass windows add to the elegance of the structure, and the interior decoration includes hand stenciled walls and ceilings, carved woodwork and seven tiled fireplaces. The house is a testimony to Hackley’s wealth, and to an era when Muskegon was known as ‘Lumber Queen of the World’.” 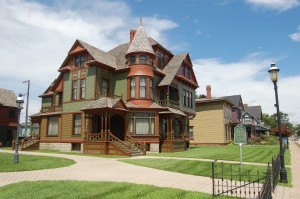 Next door we find the Hume house, which has fewer opulent interior decorations and a comfortable, family home feel: “Built in 1887-89, this massive Queen Anne style house served the Thomas Hume family through four generations. The architecture for this, as well as the Hackley house, was David S. Hopkins of Grand Rapids. The structure behind the two buildings was shared by both families. Known as the City Barn, it reflects the features of each house. Though larger than the Hackley house, the Hume house is less pretentious in detail. One hundred years after completion, the Hackley & Hume Historic Site was administered by the Muskegon County Museum.” 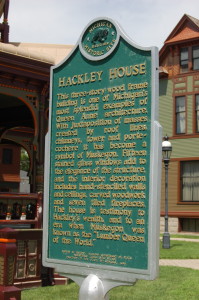 Charles H. Hackley’s name can be found on many buildings around downtown Muskegon. He founded Muskegon Heights, and chose to stay in the area after the lumber industry declined and shifted to th ePacific Northwest: “Charles H. Hackley (1837-1905) came to Muskegon in 1857. Though he had only seven dollars when he arrived, he was worth $12 million at the time of his death. He made his fortune in lumber, and when lumber declined, he administered the Chamber of Commerce program that rebuilt Muskegon into a center of industry. His gifts and endowments to the community totaled over $6 million and supported parks, statuary, schools, local churches, a hospital and a public library.” 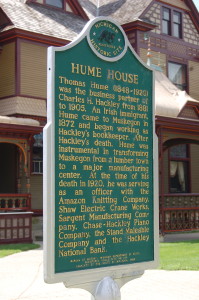 Thomas S. Hume worked with Mr. Hackley and even had a ship named after him (it was lost on Lake Michigan in 1891: “Thomas Hume (1848-1920) was the business partner of Charles H. Hackley from 1881 to 1905. An Irish immigrant, Hume came to Muskegon in 1872 and began working as Hackley’s bookkeeper. After Hackley’s death, Hume was instrumental in transforming Muskegon from a lumber town to a major manufacturing center. At the time of his death in 1920, he was serving as an officer with the Amazon Knitting Company, Shaw Electric Crane Works, Sargent Manufacturing Company, Chase-Hackley Piano Company, the Stand Malleable Company and the Hackley National Bank.”