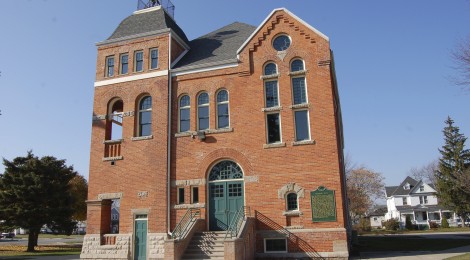 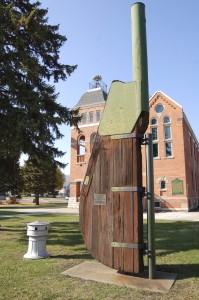 Marine City is a small town on Michigan’s Lake Huron full of rich history, including the Marine City Historic City Hall building. The Michigan historical marker on the side of the building tells about it as well as the city. “Built in 1884 at a cost of $12,300, this edifice has served continuously as the seat of local government. Marine City was incorporated as the village of Marine in 1865. It became Marine City in 1867. The first village president was David Lester, a prominent shipbuilder. Shipbuilding was the principal industry for about half a century, employing several hundred men. During the era of wooden ships, this city was one of the largest ship building centers in the Great Lakes area, with an output of nearly 250 vessels by 1900. The discovery of salt on Catholic Point in 1882 proved to be another prosperous business with major salt companies springing up as a result of this important find.” 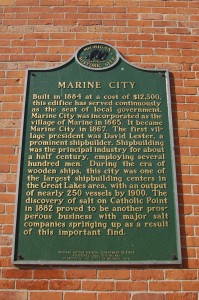 In the picture at the top you can see the wooden rudder of the tug Protector, which has been placed on the city hall grounds as a nod to the area’s maritime heritage. According to a plaque on the rudder this 409-ton ship was the last major wooden vessel built in Marine City, at the Sydney C. McClouth Shipyard in 1919. 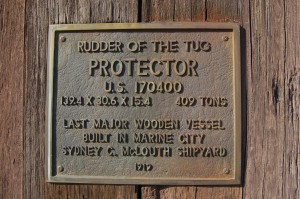 The city hall building may no longer be used for its original purpose, but preservation efforts by the Friends of City Hall have helped keep it preserved as the years have continued to take a toll. On their website you can learn a bit more history of the building: “Designed by the young architectural team of Mason and Rice, the building was finished in 1884 in the popular style established by the architect H.H. Richardson called Romanesque Revival. It was a period of growth and wealth in Marine City and city leaders were very interested in expressing the exuberance of their city with an equally exuberant and grand home for city government. They were the glory days of the late Victorian era. The 20th century was not always kind to this building inflicting some unwise modifications during the Great Depression, radical, destructive, interior remodeling in later decades and extended periods of benign neglect. The 21st century opened with a tug of war between those who would destroy and those who would preserve the building. Preservation carried the day but funding the total restoration of the structure is beyond city means.” You can check out their recent pamphlet to learn 10 reasons why this historic building should not be torn down (we wholeheartedly agree). 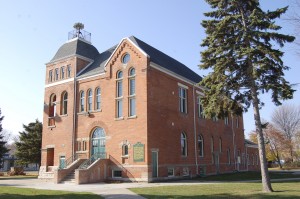 A 2012 investigation found that the Marine City Historic City Hall might be haunted, adding an interesting twist to its history. You can find it at 300 Broadway, the corner of Broadway and Main St. (see map below).