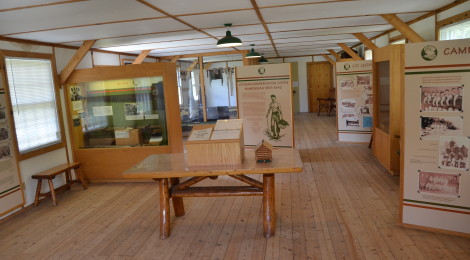 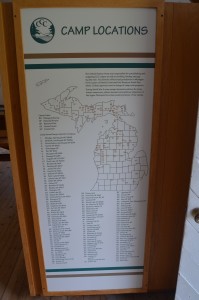 Michigan was once home to more than 120 Civilian Conservation Corps camps employing more than 102,000 men. As part of President Franklin D. Roosevelt’s New Deal the CCC gave young men the chance to work and learn trade skills while helping improve state and national parks and forests. The Michigan Civilian Conservation Corps Museum at North Higgins Lake State Park near Grayling features a reconstructed CCC work camp. This free museum takes visitors through several camp buildings while explaining the successful efforts of CCC workers in improving forest fire fighting and reforestation. “From 1933 until 1942, young men from Camp Higgins Lake did most of the work at the nursery. Workers at other camps planted seedlings from the nursery in state park and forest land across the state.”

Exhibits at the museum include:

the Hale Fire Tower, an example of an enclosed fire tower

the Packing House, where seeds were packed to be shipped to state forests across Michigan

the Icehouse, where ice from Higgins Lake was used to keep the seedling roots from drying out

the Cone Barn, which housed an oven for drying pine cones

the Barracks, a reproduction of what living quarters looked like for CCC workers

the Ram Pump, which pumped water in for the seedbeds

There is a 1.25-mile fitness trail on the property that makes its way through the forest, complete with interpretive signs describing the types of trees and wildlife found here. You’ll find the Michigan CCC Museum on the north side of North Higgins Lake Dr., opposite the entrance for the park campground and beach area. Enjoy this gallery of photos from our visit!