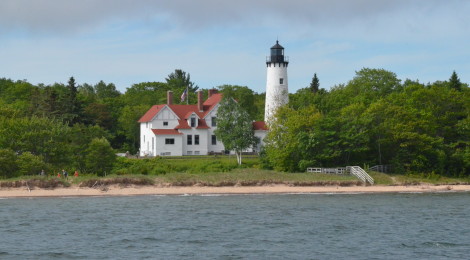 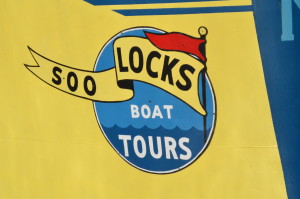 In June, we had the chance to take a Soo Locks Boat Tours Lighthouse Cruise. This four and a half hour narrated cruise takes visitors from Sault Ste. Marie through the Soo Locks, out on the St. Mary’s River and into Whitefish Bay, passing several lighthouse, range lights and lighthouse ruins along the way. The return trip features an up-close view of landmarks on the Canadian shoreline and a passage through the Canadian lock. In countless visits to Sault Ste. Marie, this was an experience that we had somehow not taken part in yet! While on this trip we also got to see several freighters and a cruise ship as they passed by, and we also enjoyed breakfast on the Le Voyageur. Find out more about these cruises, including cost and a departure schedule, at http://www.soolocks.com/lighthouse-cruises-26/. Today we will share some of the highlights of this trip while also sharing one of our largest photo galleries to date. Enjoy! 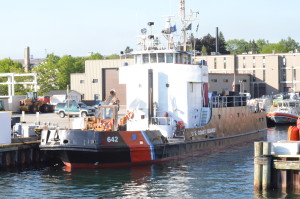 Departing from the Soo Locks Boat Tours dock next to the Museum Ship Valley Camp and the Cloverland Electric Cooperative Hydroelectric Plant, the first views from the water are of Sault Ste. Marie landmarks like the homes on Historic Water St., the Tower of History, Fort Brady, the United States Coast Guard station and more. 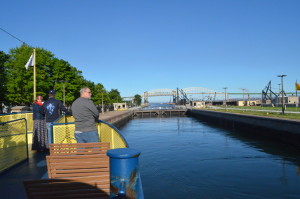 From there, passengers experience an early highlight of the trip as they make their way through the American Soo Locks. After watching ships get raised and lowered here many times over the years, it was incredibly interesting to finally take part in that process firsthand. After the lock had raised the Le Voyageur 21 feet to the level of Lake Superior, we were back on our way and heading under the International Bridge.

The International Bridge connects Sault Ste. Marie, Michigan with Sault Ste. Marie, Ontario. It is nearly three miles long and it stands 124 feet tall at its highest point. The next closest crossings between Canada and the United States are found in Grand Portage, Minnesota (480 miles to the west) and Port Huron, Michigan (345 miles southeast). 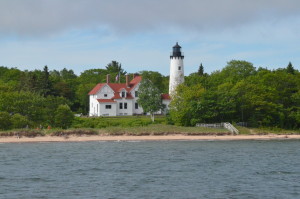 The cruise then focuses on notable landmarks on the shoreline as well as several lighthouses, including the Point Aux Pins Range Lights (Canada) and the Round Island Lighthouse ruins (Michigan). We then passed the community of Bay Mills before reaching the Point Iroquois Lighthouse. This lighthouse was built in 1871 and is now open as a museum run by the United States Forest Service. We had visited it many times before but seeing it from the water provided a different view.

The tour then heads for the Canadian Gros Cap Reef Light, a unique unmanned lighthouse that features a helipad and a concrete “shovel” point that helps break up the ice coming into Whitefish Bay. After a brief stop to see the Laurentian Mountains from the water, we were headed back to the dock. 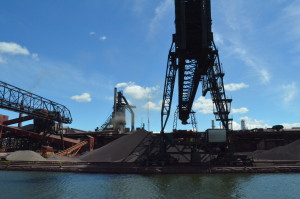 On the way back, the tour makes a stop at Essar Steel Algoma, a Canadian steel producing plant that employs more than 3,500 people. 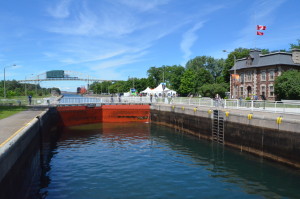 We used the Canadian lock for the return trip. This lock is now used for recreational craft and tour boats, not large freighters and shipping traffic. After taking in the sights of the Sault Ste. Marie, Ontario shoreline (including the Norgoma museum ship, the Bushplane Museum and more) we headed back to the Soo Locks Boat Tours dock. 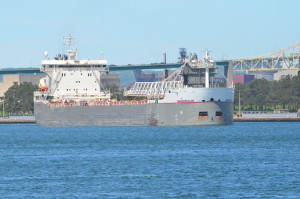 On our trip we were lucky enough to see a cruise ship (Victory I) and two freighters (Algoma Harvester and Manitoulin) up close. The Indiana Harbor and CSL Assinboine could be seen in the distance before we headed back from Gros Cap. This was an amazing tour that was informative and well-run. We consider Soo Locks Boat Tours a must if you plan on vacationing in Sault Ste. Marie!