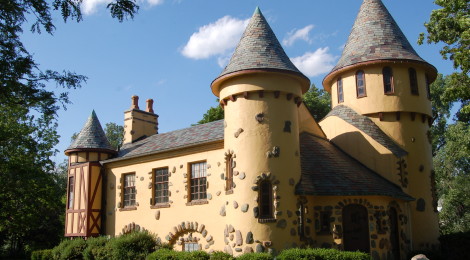 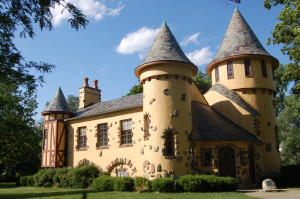 Owosso is a town of around 15,000 residents in Shiwassee County on the banks of the Shiawassee River. It is home to several notable historic sites, with the most famous being Curwood Castle. Author James Oliver Curwood lived in this house and wrote many of his novels, like The Grizzly King and The River’s End, here. This house was constructed in the style of an 18th century French chateau thanks to the comfortable living Curwood was able to make from writing by the 1920s. At the time of his death, Curwood was the highest paid (per word) author in the country. The Grizzly King was turned into the movie The Bear in  1988 and was one of nearly 20 novels or short stories of his to be adapted to film. John Wayne starred in 1934’s The Trail Beyond, based on Curwood’s novel The Wolf Hunters. A historic marker at the castle site details more of the author’s life: 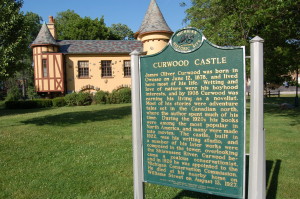 James Oliver Curwood was born in Owosso on June 12, 1878, and lived here most of his life. Writing and love of nature were his boyhood interests, and by 1908 Curwood was earning his living as a novelist. Most of his stories were adventure tales set in the Canadian north, where the author spent much of his time. During the 1920s his books were among the most popular in North America, and many were made into movies. The castle, built in 1922, was his writing studio, and a number of his later works were composed in the tower, overlooking the Shiawassee River. Curwood became a zealous conservationist, and in 1926 he was appointed to the Michigan Conservation Commission. He died at his nearby home on Williams Street on August 13, 1927. 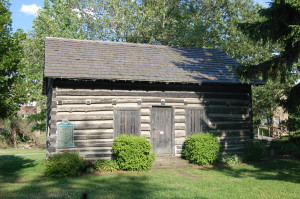 The castle is located on Curwood Castle Drive, near its intersection with River St. two blocks north of M-21. Other notable sites in the same area are the Comstock Cabin – the first residence in the area, and a scenic stone bridge over the river. 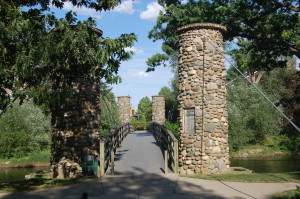