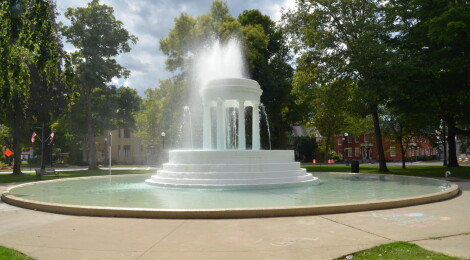 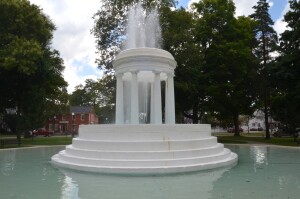 Some Michigan roadside attractions are pretty hard to miss. The Brooks Memorial Fountain in Marshall is located in the center of town, in the center of a roundabout that carries its two major streets (Kalamazoo Ave. going North-South and Michigan Ave. going East-West) through downtown. Marshall’s downtown is full of history, and the fountain adds to the beauty of its landscape with a European-inspired design and a nightly light display. 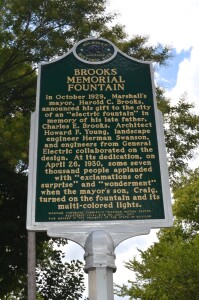 A Michigan historical marker was added to the park in 2017, and from it we learn of the fountain’s backstory: “In October 1929, Marshall’s Mayor, Harold C. Brooks, announced his gift to the city of an “electric fountain” in memory of his late father, Charles E. Brooks. Architect Howard F. Young, landscape engineer Herman Swanson, and engineers from General Electric collaborated on the design. At its dedication, on April 26, 1930, some seven thousand people applauded with “exclamations of surprise” and “wonderment” when the mayor’s son, Craig, turned on the fountain and its multicolored lights.” 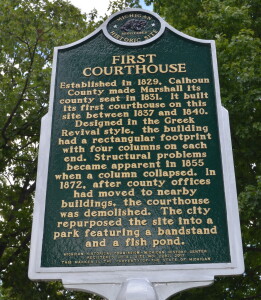 This was also the site of the first courthouse in Calhoun County, as the other side of the historical marker details: “Established in 1829, Calhoun County made Marshall its county seat in 1831. It built its first courthouse on this site between 1837 and 1840. Designed in Greek Revival style, the building had a rectangular footprint with four columns on each end. Structural problems became apparent in 1855 when a column collapsed. In 1872m after county offices had moved to nearby buildings, the courthouse was demolished. The city repurposed the site into a park featuring a bandstand and a fish pond.” 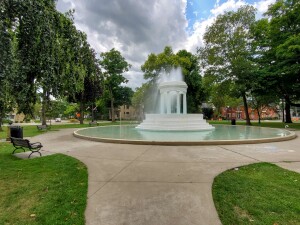 The Honolulu House Museum, one of Eight Marshall Museums in the downtown area, is located across the street to the northwest from the fountain. The Jeremiah Cronin House, inspiration for John Bellairs’ novel The House With a Clock in Its Walls and a 2018 film version, is just a few blocks away.