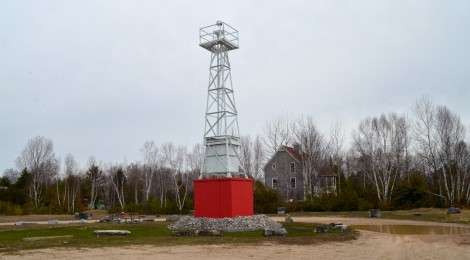 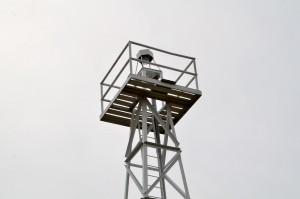 Michigan is home to more than 120 lighthouses, and while they may not all be as beautiful and recognizable as the Holland Harbor Light or the Point Betsie Lighthouse they all have a purpose and a story behind their existence. We recently had the chance to visit Onekama, where the former Portage Lake Pierhead Light sits in a small park at a MIDNR boat launch site. This simple steel skeletal tower was built in 1930 and spent more than 50 years marking the channel entrance to Portage Lake from Lake Michigan. It took many years and a lot of work to get it restored and placed in its current location, but it now rests there for everyone to see. 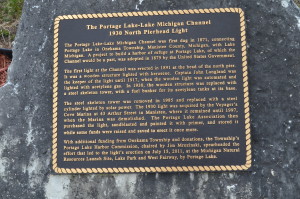 A small metal plaque on a rock by the picnic area gives more background of the lighthouse and how it got here: “The Portage Lake-Lake Michigan Channel was first dug in 1871, connecting Portage Lake in Onekama Township, Manistee County, Michigan, with Lake Michigan. A project to build a harbor of refuge at Portage Lake, of which the Channel would be a part, was adopted in 1879 by the United States Government. The first light at the channel was erected in 1891 at the head of the north pier. It was a wooden structured lighted with kerosene. Captain John Langland was the keeper of the light until 1917, when the wooden light was automated and lighted with acetylene gas. In 1930, the wooden structure was replaced with a steel skeleton tower, with a fuel bunker for its acetylene tanks at its base. The steel skeleton tower was removed in 1985 and replaced with a steel cylinder lighted by solar power. The 1930 light was acquired by the Voyager’s Cove Marina at 43 Arthur Street in Manistee, where it remained until 1997, when the Marina was demolished. The Portage Lake Association then purchased the light, sandblasted and painted it with primer, and stored it while some funds were raised and saved to erect it once more. With additional funding from Onekama Township and donations, the Township’s Portage Lake Harbor Commission, chaired by Jim Mrozinski, spearheaded the effort that led to the light’s erection on July 15, 2011, at the Michigan Natural Resources Launch Site, Lake Park and West Fairway, by Portage Lake.” 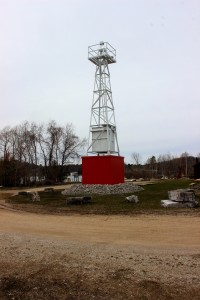 To get to the Portage Lake Pierhead Light from M-22 in Onekama, turn west on Portage Point Dr. for a little more than two miles. Turn left on Seymour Street, and follow it for a half mile to where it meets Lake Park Dr. Turn right on Lake Park Dr. and follow it past its intersection with W. Fairway St. to its end at the boat launch and the lighthouse. Following Portage Park Dr. around the lake to Captain John Langland Park where you can see the pier and the current pier light that replaced this one.