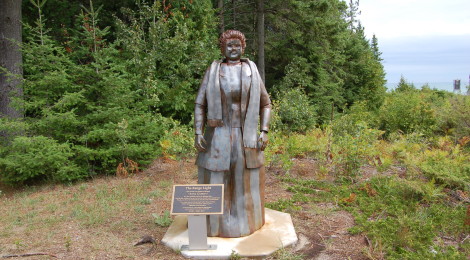 March is Women’s History Month: 12 Amazing Michigan Women You Should Know About

Each year in March, we celebrate Women’s History Month by taking a look at the contributions made by women who chose to push limits, demand equality, contribute to major scientific discoveries, and make things better for future generations. Many famous women with Michigan ties (like Rosa Parks, Sojourner Truth, Diana Ross, and Betty Ford) get a lot of attention, but we wanted to focus on some of the women we have learned about while traveling all over Michigan. You may not be familiar with their names, but you should be. Here are 12 Amazing Michigan Women You Should Know About: 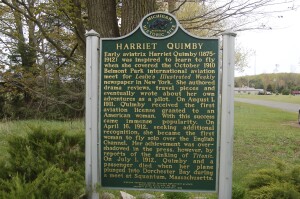 Harriet Quimby – Almost everyone is familiar with Amelia Earhart, but Michigan had a female aviation pioneer of its own. A Michigan historical marker in Coldwater tells us that Quimby was “the first woman in the United States, and the second in the world to obtain a pilot’s license, received Federation Aeronautique Internationale license No. 37 from the Aero Club of America on August 1, 1911. On April 16, 1912, Quimby became the first woman to cross the English Channel, flying from the Cliffs of Dover to Hardelot, France. She returned in triumph to the United States after being feted in Europe. In June, she shipped her plane to Boston so that she could fly in the Harvard-Boston Aviation Meet. On July 1 she flew the manager of the meet, William A.P. Willard, around the Boston Light. During the flight, her Berliot plane was caught in turbulent air and nose-dived, plummeting both Willard and Quimby to their deaths in Dorchester Bay.” 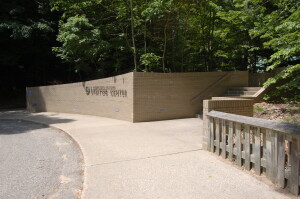 Emma Genevieve Gillette – If you’ve visited a Michigan state park, you’ve seen the work of this Michigan woman. Gillette was a landscape architect that worked closely with P.J. Hoffmaster in efforts to preserve and expand our state park system. After Hoffmaster died, Gillette took over and continued to fight for funding that helped put Michigan state parks on track to become what they are today. The E. Genevieve Gillette Nature Center at Hoffmaster State Park (pictured)was named in her honor in the 1970s. 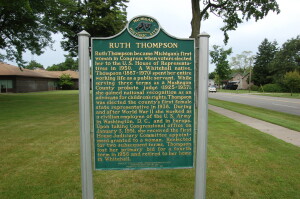 Ruth Thompson – “Ruth Thompson became Michigan’s first woman in Congress when voters elected her to the U.S. House of Representatives in 1950. A Whitehall native, Thompson (1887 – 1970) spent her entire working life as a public servant. While serving three terms as a Muskegon County probate judge (1925 – 1937), she gained national recognition as an advocate for children’s rights. Thompson was elected the county’s first female state representative in 1938. During and after World War II she worked as a civilian employee of the U.S. Army in Washington D.C. and in Europe. Upon taking Congregational office on January 3, 1951, she received the first House Judiciary Committee appointment granted to a women.” A Michigan historical marker noting her achievements can be found in front of the Whitehall Police Department building on E. Colby St. 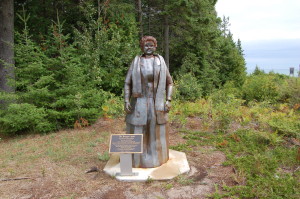 Anna Garrity – You can read about Anna and other female lighthouse keepers in the book Ladies of the Lights by Patricia Majher. She maintained the Presque Isle Front Range Light from 1903 to 1926, just down the road from where her father Patrick was keeper at the New Presque Isle Lighthouse. Fewer than 30 women served as keepers of lights on the Great Lakes. A statue of Anna Garrity was added to the range light park in 2013. 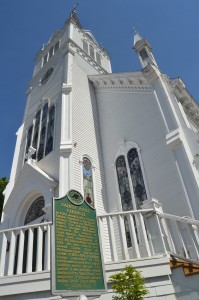 Magdelaine Laframboise – One of the first women in Michigan to have success in business, Laframboise took over a fur trading business after her husband’s death. In addition to running multiple trading posts in the Lower Peninsula, she kept returning to Mackinac Island each year and had quite the impact there. She helped support a Catholic school on the island and made sure Native American children had a place to learn. Deeply involved with Ste. Anne Church on Mackinac Island (pictured), she is buried under its altar. From the church website: “Laframboise, a prominent Mackinac Island fur trader of mixed Ottawa and French blood, provided crucial leadership and support during the first half of the nineteenth century. Her devotion is well documented in the parish register where she frequently appears as a godmother to the baptized and witness at marriages.”

Christina Hammock Koch – Born in Grand Rapids, Koch has become one of the most famous astronauts with Michigan ties. She has sent more than 300 days in space, and she took part in the first all-female spacewalk on October 18, 2020. To learn more about Koch and other Michigan astronauts, visit the Michigan’s Own Military & Space Museum in Frankenmuth. 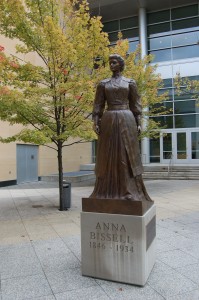 Anna Sutherland Bissell – Honored with a statue behind the DeVos Place Convention Center as part of the Grand Rapids Community Legends project, Bissell was in charge of a vacuum cleaner empire: “In 1871, as the Grand Rapids’ industrial power began to rapidly increase, Anna Bissell and her husband, Melville, moved to Grand Rapids from Kalamazoo to capitalize on the city’s growth and opened a crockery business. When Anna discovered that she could not remove dust from the crockery workshop, Melville decided to build a compact sweeping devise, later patented in 1876 as the BISSELL Sweeper. Over the next decade, Anna and Melville opened a manufacturing plant in Grand Rapids and distributed sweepers across the country. In 1889, upon her husband’s death, Anna became CEO of BISSELL, becoming one of America’s first female corporate CEOs. By 1899, she created the largest corporation in the world of its kind. She was known as a creative executive who also showed concern for her employees, developing employee compensation plans and avoiding lay-offs during The Great Depression. Anna Bissell served as president and CEO of BISSELL until 1919 and board chair until 1934. She was devoted to her five children and helping the less fortunate. She served on the board of Blodgett Home for Children and the Red Cross.” 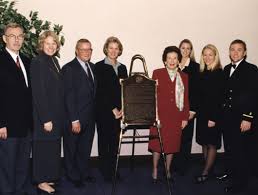 Mary Coleman – A Michigan legal milestone plaque in Battle Creek details the amazing legal career of Mary Coleman: “Mary Coleman’s life and career have made a lasting impact on Michigan’s judicial system. Her success in the profession, her devotion to juvenile justice issues, and her work on the advancement of court reorganization are just a few examples of this remarkable woman’s accomplishments. In 1972, Mary became the first woman to serve as a member of the Michigan Supreme Court. In 1979, she was the first woman elected by her peers on Michigan’s highest court to serve as its chief justice, a position to which she was re-elected for another two-year term. Born Mary Stallings in Forney, Texas in 1914, Mary’s parents, who met and married while attending the University of Texas, provided Mary with her first exposure to the legal profession. When Mary was four years old, the family moved to Washington, D.C. where her father worked in a law office while her mother worked as a lawyer for the U.S. Department of Justice. Mary graduated from the University of Maryland in 1934 and obtained her law degree in 1939 from George Washington University. She worked full time in a government office while attending law school to support herself and pay for her education.  In 1939, she married Creighton Coleman and eventually moved to Battle Creek, Michigan where she practiced law and the couple raised their two daughters. In 1960, after serving as a juvenile court referee, Mary was elected as a probate and juvenile judge in Calhoun County. She assisted in drafting many of the initial child abuse laws in this state as well as laws related to protective services. Mary’s court was known as an innovative court, creating various juvenile programs that focused on preventative measures and education in juvenile homes. She was the first chair of the State Bar of Michigan Committee on Juvenile Affairs and served as president of the Probate and Juvenile Court Judges Association. In 1979, Mary led the reorganization and state financing efforts of Wayne County and Detroit courts. “The interesting part to me was that everybody said reorganization couldn’t be done,” Mary said. “I asked all the presiding judges to meet me in my office with their court administrators in Lansing on a certain morning, and revealed to them what my concept was and what should be done.” Mary proved that indeed, it could be done.”

Emelia Schaub – Another Michigan legal milestone plaque (this one in Leland) taught us about Emelia Schaub and her trailblazing career in law: “Born in a log cabin in Leelanau County in 1891, Emelia Schaub, the first woman in Michigan to be elected and to serve as county prosecutor, achieved great distinction as a lawyer and citizen. She became the first Leelanau County woman to practice law upon her graduation from Detroit College of Law in 1924, later earning a masters of law degree from the University of Detroit. In 1926, news accounts cited her as the first woman attorney in the nation’s history to successfully defend a murder case. Miss Schaub was elected to the first six terms as Leelanau County prosecutor in 1936. While in that office, she arranged for the return of Ottawa and Ojibwa lands from the State to Leelanau County, creating a de facto reservation. Possession of this land base helped the Grand Traverse Band of Ottawa and Chippewa Indians achieve federal recognition in 1980. Long active in her profession and community, she served as secretary and treasurer of the Women Lawyers Association of Michigan, and helped found both the Leelanau Foundation and the Leelanau Historical Society. Emelia Schaub was elected to the Michigan Women’s Hall of Fame in 1990 and was named a Champion of Justice of the State Bar of Michigan the following year. 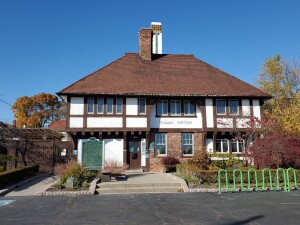 Mary Chase Perry Stratton – Co-founder of a pottery focusing on handmade ceramics, the legacy of Mary Chase Perry Stratton lives on in many Detroit buildings and other landmarks across the country. A Michigan historical marker in front of Pewabic Pottery reads: “Mary Chase Perry was born in 1867 in Hancock, Michigan. By age ten she had moved to Detroit. She studied china painting and sculpture at the Cincinnati Art Academy from 1888 tom 1890. In 1903 Perry co-founded a pottery in Detroit and named it Pewabic after the Upper Peninsula copper mine near Hancock. She later married architect William B. Stratton, who designed the Pewabic Pottery building. During her prolific career, Perry developed new, iridescent pottery glazes, taught and wrote widely about ceramics, and was awarded honorary degrees from the University of Michigan and Wayne State University. She died in 1961 at age ninety-four. Pewabic Pottery celebrated its centennial in 2003.” 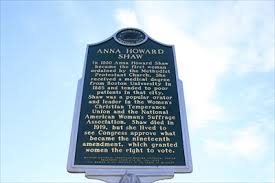 Anna Howard Shaw – A Michigan historical marker north of Big Rapids gives some background on the life of Anna Howard Shaw: “As a child in 1859 suffragist Anna Howard Shaw (1847-1919) moved with her family from Massachusetts to Mecosta County. Her father soon returned east with two of his sons. leaving behind his wife and four younger children to endure extreme hardship on their 3360-acre claim. Forced to take on traditionally male roles to survive, Anna believed women were equal to men. A teacher at age fifteen, she later became a minister, a physician, and an orator. In 1880 Anna Howard Shaw became the first woman ordained by the Methodist Protestant Church. She received a medical degree from Boston University in 1885 and tended to poor patients in that city. Shaw was a popular orator and leader in the Women’s Christian Temperance Union and the National American Woman’s Suffrage Association. Shaw died in 1919, but lived to see Congress approve what became the nineteenth amendment, which granted women the right to vote.”