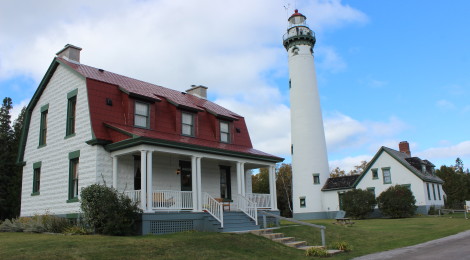 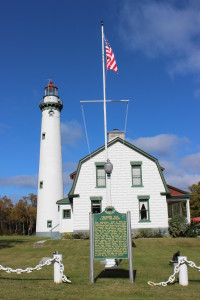 The stretch of Lake Huron from Cheboygan to Alpena was one of the most dangerous for mariners in the 1800s and 1900s, and several lighthouses (Alpena, Old Presque Isle, New Presque Isle, Forty Mile Point, Cheboygan Crib Light) were constructed over the years to help light the way. The tallest of these is New Presque Isle Light Station, with a tower that is 109 feet tall. The lighthouse is now part of a county park complex, allowing visitors to explore the grounds, visit a museum, and climb the tower for amazing views. 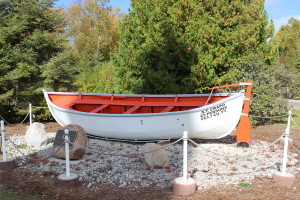 This lighthouse was constructed to replace the deteriorating Old Presque Isle Lighthouse, which can be found about two miles to the south. The tower featured double-wall construction and a spiral staircase, a design that would later be duplicated in other lights across the state. Keepers tended this station from 1870 to 1970, then it became automated. The park opened in 1998, and features several restored support buildings and nautical artifacts like the lifeboat from the S.T. Crapo (shown above). 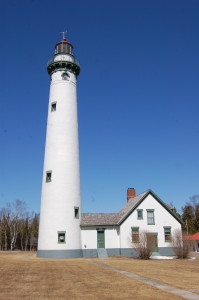 A Michigan historical marker in front of the lighthouse tells more of the history of the structure and this location: 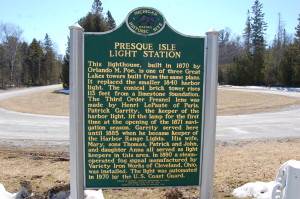 This lighthouse, built in 1870 by Orlando M. Poe, is one of three Great Lakes towers built from the same plans. It replaced the smaller 1840 harbor light. The conical brick tower rises 113 feet from a limestone foundation. The Third Order Fresnel lens was made by Henri LePaute of Paris. Patrick Garrity, the keeper of the harbor light, lit the lamp for the first time for the opening of the 1871 navigation season. Garrity served here until 1885 when he became keeper of the Harbor Range Lights. His wife, Mary, sons Thomas, Patrick and John, and daughter Anna all served as light keepers in this area. In 1890 a steam operated fog signal manufactured by Variety Iron Works of Cleveland, Ohio, was installed. The light was automated in 1970 by the U.S. Coast Guard. 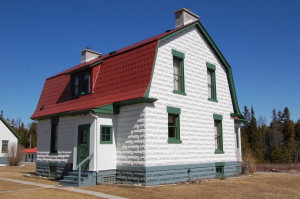 This is one of the most beautiful beacons on Michigan’s Lake Huron coast, thanks to its tall tower and the colorful trim paint and roof that accent the tall white tower. Museum hours have ended for 2015, but plan on visiting this light next spring, summer or fall when you’re on the Sunrise Side. 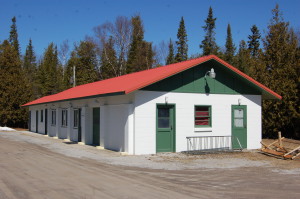 The lighthouse can be found easily from US-23 about 15 miles south of its intersection with M-68 and eight miles north of Alpena (and the easy to visit Alpena Light). From the south, turn onto East Grand Lake Rd. and follow it for 3.3 miles to a stop sign. Turn right to stay on Grand Lake, and follow it for about 8 miles as you pass the front range light and Old Presque Isle Lighthouse on your way to New Presque. From the north head south on US-23 until you reach Highway 638. Head east on 638 for a little more than 4 miles where it dead ends into E. Grand Lake Rd. Follow the signs from here, it is a little less than 2 miles to New Presque. The view from the top of the tower is truly breathtaking, and especially beautiful in the fall. 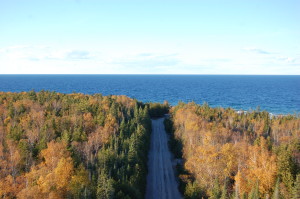