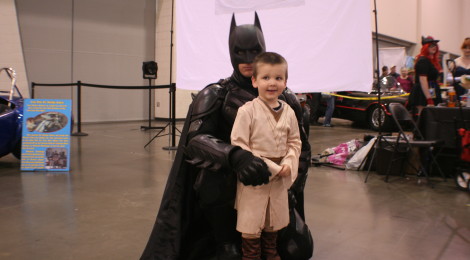 Our Family Friendly Review of the 2017 Grand Rapids Comic Con

The Grand Rapids Comic Con continues to rise in popularity. With the rising popularity and increased attendance comes some small worries, but fans were once again treated to a great event hosted at DeVos Place Convention Center. The event continues to be the best in the area for cosplay, meeting celebrities, and interacting with the artists who make stories come alive.

We shared our photo gallery recently, which included pictures from the two days we attended the event (Friday and Sunday). Both days I attended included taking my two sons (ages 3 and 5). This is an incredible family friendly event that I can’t say enough about.

My sons created a countdown calendar we kept on the fridge at home, with the target date being Grand Rapids Comic Con. Prior to the big day, they had been shown photos and told what to expect. (My oldest attended a prior Grand Rapids Comic Con). In our preview article, we shared some of the items we were excited about prior to attending. 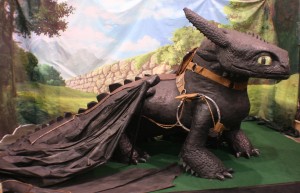 By far the event they were looking forward to the most was meeting Toothless. Thanks to Brazen Monkey (by John Marks), a large sculpture of Toothless from the 2010 movie How to Train Your Dragon was one of the big attractions at the Grand Rapids Comic Con. This amazing piece was a big hit at the comic con both days we attended. Attendees could pay a small amount to have their picture taken with Toothless or even sit on the dragon. A portion of the proceeds went to Make a Wish.

Both of my boys had a chance to sit on Toothless and get their pictures taken. The staff at this booth were very friendly. John Marks, the sculptor of Toothless, also donned different cosplay each day of the Grand Rapids Comic Con. On Friday, he pulled off a perfect Logan. On Sunday, Marks drew a crowd of people wanting to take pictures with him, as he turned in a rather impressive Negan. It probably helped that this was also the same day the Season 8 premiere of The Walking Dead was about to take place. I was able to get a picture of Negan showing me Lucille. 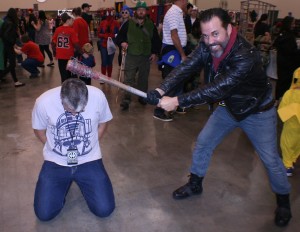 John Marks is also an excellent cosplayer. Here he is as Negan from The Walking Dead, showing me Lucille

Rob Miller and his sculptures continue to be a popular attraction at Grand Rapids Comic Con. This year, Miller created life size replicas of Groot and Rocket Raccoon from Guardians of the Galaxy. Guests at Grand Rapids Comic Con could get their pictures with Groot and Rocket Raccoon for free. Miller also brought previous creations like the Hulkbuster and the Iron Throne from Game of Thrones. 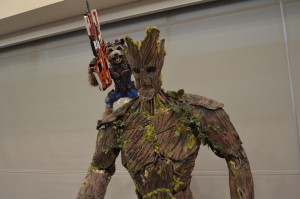 This year, Rob Miller made a life size replica of Groot and Rocket Raccoon from Guardians of the Galaxy

One of my favorite memories from the Grand Rapids Comic Con was just walking around looking for fun costumes people were wearing. My kids enjoyed pointing out outfits that were familiar to them and also posing with cosplayers for pictures. Everyone at this comic con was very accommodating when asked for photos. 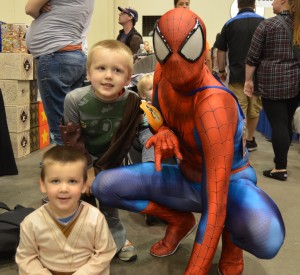 This fan dressed as Spider-Man was nice enough to pose with my boys, one of their favorite moments

Getting pictures with members of the Great Lakes Garrison was also a big highlight. My kids are big Star Wars fans and dressed up as characters from the franchise both days of the convention. Getting pictures with Star Wars characters and the Mandalorian Mercs was an awesome experience for the boys as well. One of the biggest hits was seeing the droids roaming the floors of the con, members of the Michigan Droid Builders. These interactive droids that resembled R2-D2 and other Star Wars droids roamed the convention and even “talked” to kids that got close enough. My kids loved meeting them and answering questions the droids asked. 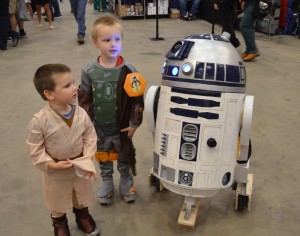 My kids loved seeing all the superheroes at the Grand Rapids Comic Con. One newer group this year was the Cosplay Crusaders. This local Grand Rapids group was a big draw this year and included members like Supergirl, Punisher, and Batman. The Dark Knight of Michigan, a new member of the Cosplay Crusaders group, was also a favorite. How cool is it that my son can tell me that he met Batman? 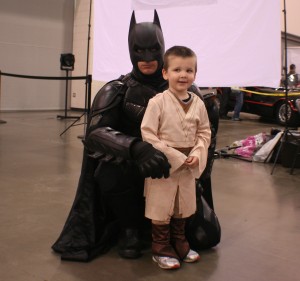 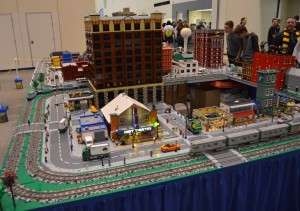 The big draw at the kids’ area was LEGOs. Kids could marvel at the city and train made out of LEGOs. There were several large tables where kids could create their own LEGO masterpieces. It took some effort to pry my kids away from this area. 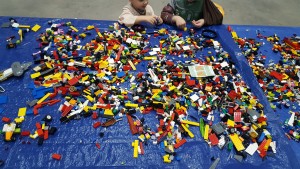 The kids’ area also offered interactive toys like Magna Tiles, and other construction building kits from the Kent District Library. This area also featured a robotics area, which would be great for older kids. A giant race car track also presented the opportunity for kids to compete in a competition to see who picked the fastest car. The table that supplied crayons and Star Wars coloring pages was also a great space to take a break from the crowded vendor areas.

I attended the Grand Rapids Comic Con on both Friday (October 20) and Sunday (October 22). The Saturday of the event is always the busiest day, as it includes the longest hours, the adult costume contest, many of the top panels, and the major celebrity guests. At the opening of the convention on Saturday, the size of the crowd awaiting entry caused some backups and delays. Some people took to Facebook to voice their frustration with waiting in line. The event planners handled this well, offering their tips on how to make it through lines quicker. 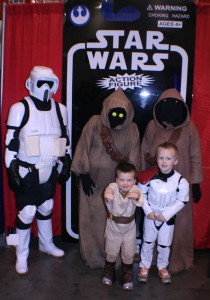 It’s cool to see a small event like this still acknowledge their guests. The Grand Rapids Comic Con Facebook page offered live updates of how long lines were and what guests could do to get through the lines quicker. The group that runs this event is clearly working in the best interest of the attendees, which is the way it should be. Consider that the Grand Rapids Comic Con Facebook page earlier this week asked for feedback to improve the event going forward. The page asked what areas were done right, what areas were done wrong, and what areas were not covered at all. 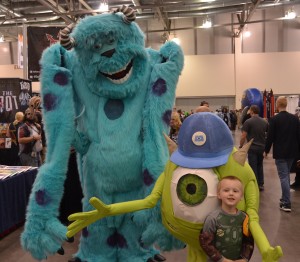 Mike and Sully from Monsters Inc.

If you ever thought about attending the Grand Rapids Comic Con or are too worried about it not having enough for your kids to do, I hope I have convinced you to put it in your plans for 2018. We will be back in 2018 to once again attend the Grand Rapids Comic Con, a great family friendly event held annually at the DeVos Place Convention Center. If you’re worried about crowd sizes, stick to Friday night, the slowest of the three event days.

*We attended the Grand Rapids Comic Con with complimentary press passes. All opinions are my own*