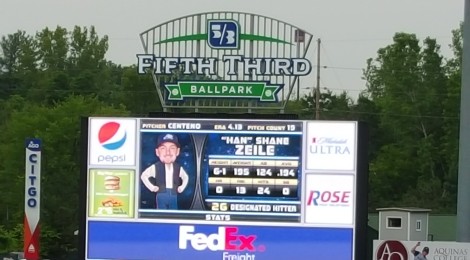 “Star Wars: The Force Awakens” opens December 17th. The highly anticipated movie will attempt to break several box office records, including the opening weekend record set earlier in 2015 by “Jurassic World”. While most people across Michigan will see the movie at some point in theatres or at home, there are plenty of other ways to enjoy the movie and the franchise the rest of 2015 and throughout 2016.

Here is a list of upcoming Star Wars events:

December 17th: Opening of “Star Wars: The Force Awakens” – Check out your local theatre for times and make sure the event isn’t sold out. My local theatre Celebration Cinema reports more than 10,000 tickets sold for showings 7pm to Midnight for December 17th. 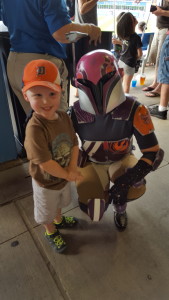 December 18th: Speaking of Celebration Cinema North, if you are planning on attending a showing of the movie on Friday, you’re in luck. The cinema is hosting a Mos Eisley Cantina at its Wave Room Banquet Hall. The all day event will feature a cash bar, costumed characters, and photo opportunities. Food samples available from 5pm to 7pm. 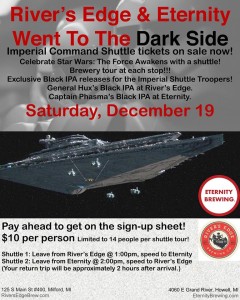 December 19th: River’s Edge Brewing and Eternity Brewing Dark Side Bus Tour – Beer lovers won’t want to miss this event. A bus tour takes customers to both breweries to get full tours and also be among the first to try two collaborative Black IPAs. The beers are named after characters in “The Force Awakens” with General Hux’s Black IPA (River’s Edge) and Captain Phasma’s Black IPA (Eternity). Bus tickets are $10 per person.

Eternity Brewing appears to be big lovers of Star Wars. The brewery hosted a Trivia night and did events all week. They currently have beers on tap with Star Wars themes. You can try the Execute Order 66 (imperial Red IPA) and Light Side of the Black Imperial IPA (join the light side).

March 5th through 6th: FantasticCon Lansing – If you’re a Star Wars fan, you will want to circle these two dates on your calendar. This year’s event in Lansing features the one and only Billy Dee Williams, best known as Lando Calrissian. The actor will appear both days with autographs and photo opportunities available (both listed now at $40 each). A VIP package is also offered for $80, which includes one autograph, one professional photo with Williams, a two day show pass to FantasticCon, a souvenir Star Wars lanyard pass, access to express line to meet Williams, and preferred seating to his question and answer panel.

March 12th: Star Wars Night at Grand Rapids Griffins Game – I have attended this event with kids each of the last three years. The game features Star Wars themes, in-game action, and giveaways. The big draw is more than 40 costumed characters.

May 4th: Star Wars Day – This day has officially become known as Star Wars thanks for some clever word play. The popular Star Wars phrase “May the Force be With You” turns into May the 4th be with you.

May 6th through 8th: Star Wars and More – The Music of John Williams. The Grand Rapids Symphony will perform highlighted selections from Star Wars movies, including “The Force Awakens”. Tickets start at $18 for these performances.

May 13th through 15th: Motor City Comic Con – This popular Michigan convention is back for another year. The 2015 convention featured Jeremy Bulloch, who played Boba Fett on screen in “The Empire Strikes Back” and “Return of the Jedi”.

June 27th: Star Wars Night with Battle Creek Bombers – Event will feature costumed characters. Kids wearing Star Wars costume will get a free ids meal at the game. Lightsaber giveaway to the first 500 fans in attendance. As a Saturday night game, there will also be postgame fireworks. 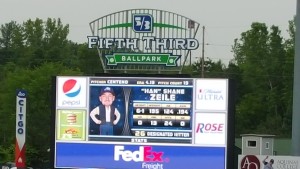 July 9th: Star Wars Night with West Michigan Whitecaps – Similar to the Griffins Star Wars Night, this event features more than 30 costumed characters and entertainment throughout the game. I have attended this game as well and am always pleased. This year’s game will feature a Star Wars themed wedding, assuming someone jumps on this offers. See details below: 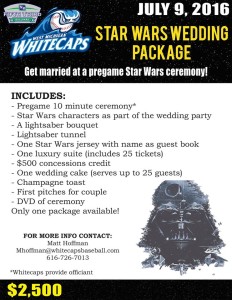 October 21st through 23rd: Grand Rapids Comic Con – You don’t want to miss this convention that will include tons of Star Wars memorabilia and possibly an appearance from a former star. The 2015 GRCC included an appearance by Dickey Beer, stuntman for Boba Fett in the Star Wars movies.

December 16th: “Star Wars: Rogue One” opens in theatres around the country. This is the first of several planned origin movies in the Star Wars universe.

We will add more events as they are announced. Last year, other sports teams also hosted Star Wars events. There will also be other events announced around the May 4th Star Wars day. Even the Detroit Red Wings are considering hosting a Star Wars Night and recently took to Twitter to get fan feedback.