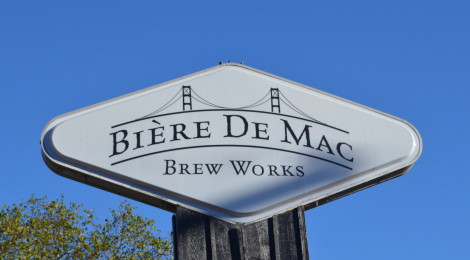 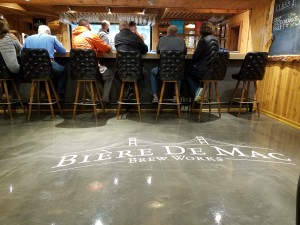 Only one brewery in Northern Michigan can boast views of the Mackinac Bridge from its parking lot, and that brewery is Biere De Mac Brew Works in Mackinaw City. Although it has only been for a year, it has already built a solid reputation with locals and vacationers thanks to its food menu and beer offerings. We had the chance to check this brewery out at the end of September, sampling a few flights of beers – here’s a look at our experience. 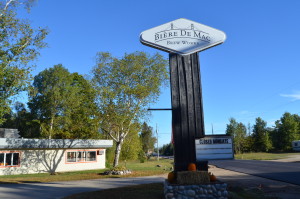 The owners detail a bit of the brewery’s backstory on their website (http://bieredemac.com/): “The Ranville family initially settled on Mackinac Island several hundred years ago, along with French explorers, traders, voyagers, and a bunch of other cool, adventuresome lads and ladies. We then moved to the mainland, and operated a fishing business in the area where the state docks are now located along the Mackinaw City waterfront. Good times were had, outlandish shenanigans took place, and our happy family grew happier. There’s a lot more to tell, but they are stories better shared over a pint of good brew. We choose to spell Biere the French way as a nod to our ancestors, who settled in the most beautiful place on the planet, and facilitated the opportunities that got us to where we are, which is a pretty amazing place to be!”

There were nine beers on tap when we visited, so we ordered a couple of flights so we could try them all. Biere De Mac Brew Works has one of the coolest flight presentations we’ve seen, with the Mackinac Bridge featured prominently. First up was the Gose, a traditional kettle sour that was tart and flavorful. We then moved on to Vacationland (cream ale), Biere de Sumac (seasonal gose), Paquet Pale (American pale ale), and Hidden Bridge Weissbier (hefeweizen). One early impression was that the variety of beers ensured there was something for everyone, and we continued on to our final four beers. Blueberry Wheat (seaonal pale ale), The Fear (Belgian Quad; 13% ABV), Marsupi-Ale NE IPA, and Fille Rousse (Belgian pale ale) finished things out for us, showing that this brewery might be new but that they already have making good beer down to a science. Our favorites for the evening included the Paquet Pale Ale and the Marsupi-Ale NE IPA. 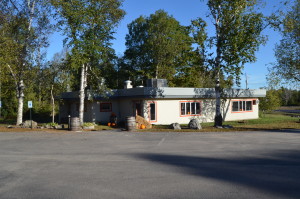 Biere De Mac Brew Works also offers a full food menu, with appetizers, salads, sandwiches, burgers, and more. You’ll also find a kids menu and several dessert options. We enjoyed our visit to Biere De Mac Brew Works and plan on returning when we visit Northern Michigan. Mackinaw City is one of the most popular tourist destinations in the state, and a brewery seems like a perfect addition – especially as Michigan continues to build on its reputation as the “Great Beer State.” Keep up to date on new beers, food offerings, and seasonal hours using the information below.