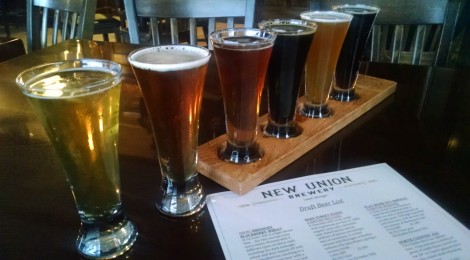 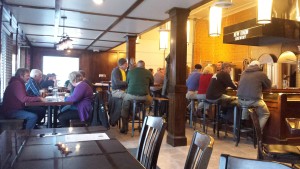 Although it’s only been open since November of 2016, Lowell’s New Union Brewery has already built a solid reputation for producing quality craft beers in a relaxed atmosphere. We recently visited this new addition to Michigan’s ever-growing beer scene and were pleasantly surprised to find it busy on a Wednesday night. Located in Lowell’s historic downtown district, New Union has proven incredibly popular with locals thanks to its welcoming atmosphere and wide variety of beer styles. While they don’t currently offer their own food (there is free popcorn available), the brewery does allow food to be brought in or delivered, and we’d recommend a couple of our Lowell favorites: Three Brothers Pizza and Main Street BBQ. 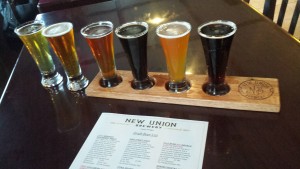 We tried out all eight beers that were on tap during our visit and easily found a few favorites. Unlike some area breweries that focus heavily on one style (around here it’s usually IPAs) we found New Union Brewery had a pretty balanced tap list that featured everything from a golden ale to a stout. First up, we tried the Midnight Blackberry Wheat – a tasty wheat beer with black berries added. Next up was the Fallasburg Pale Ale – a solid pale ale that uses four kinds of hops and has a citrusy aroma. The name pays tribute to an early settlement north of town best known for its 1870s historic covered bridge. After that we tried the Dark Roast Porter – a rich porter with dark roast coffee added. I was immediately impressed with this beer, and would favorably compare it to mass-produced offerings like Great Lakes Brewing Comapny’s Edmund Fitzgerald Porter. Our flight also included the Red Arrow Amber (a nod to Lowell High School’s mascot), Citra Session (a solid session IPA with Citra hops) and the North Country Ale. The North Country Ale is the brewery’s lightest offering – a crisp, refreshing golden ale. Its name comes from the North Country Trail, one of the country’s premier trails that covers 4,600 miles in seven states and runs through Lowell. The North Country Tail Association’s headquarters are just a few blocks east on Main St., and Lowell is an officially designated Trail Town. 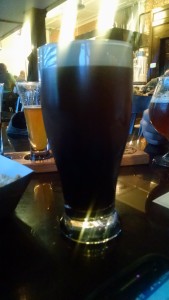 After finishing our flight and munching on some popcorn, we ordered a couple pints of New Union Brewery’s stronger offerings. The Flat River Red Imperial is a delicious red IPA named for the river that flows through downtown. At 9.1 % ABV this was the strongest offering when we visited. We also had a fantastic pour of the Main Street Stout, which has chocolate and cacao nibs added. It was sweet, smooth and delicious. These two beers, along with the Dark Roast Porter, were our favorites and what we quickly recommend to new visitors. With a great beer lineup, and amazing small town vibe and good service despite being busy New Union Brewery gets our stamp of approval! 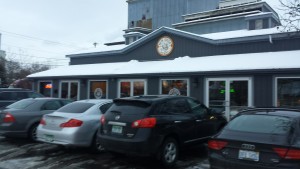