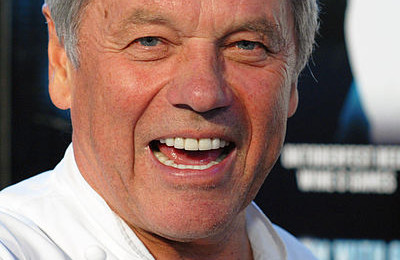 The Kitchen is said to be an upscale casual restaurant. Grand Rapids should be extremely proud to get a Wolfgang Puck restaurant in its city, especially since this is only the second one operated as this concept. The only other The Kitchen by location will be opened in Dubai. This location will have a dual level riverfront terrace. The location will also add a bar, a large wine cellar, and a private dining room.

Along with The Kitchen, Wolfgang Puck will gain another location in the city with his Wolfgang Puck’s Express replacing the Cornucopia deli on the Pearl Street side of the ground floor.

Bentham’s is set to close by the end of February. The Kitchen will open in the fall of 2015 and seat 230 people, counting outside seating as well. The early articles about the restaurant say the menu will be “very approachable” with prices compared to 616 (in JW Marriott) and Bistro Bella Vitta. That puts the price range for entrees at around $25 to $30, which is on the cheap side for a Wolfgang Puck concept.

Wolfgang Puck has concepts all over the world operating under various names including the famous Spago fine dining line. He has several concepts open in the MGM Grand Hotel/Casino in Detroit. There, guests can eat at a themes pizzeria or steakhouse bearing his name.

Grand Rapids continues to attract top names and concepts. The opening of a Ruth’s Chris Steakhouse and now Wolfgang Puck The Kitchen signal a demand for Grand Rapids as a destination location. Keep in mind that Puck traveled to Grand Rapids to scout out the possibility of a location. We will be checking back in later this year to see how progress is going on The Kitchen.