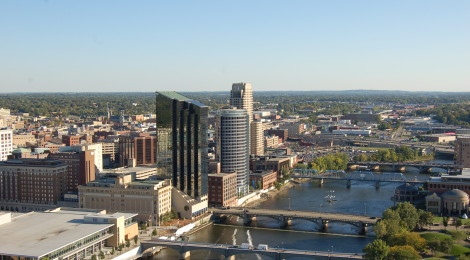 In 2013, the city of Grand Rapids began showing a series of movies downtown in Ah-Nab-Awen Park. The series continues now in its third year with the recently announced schedule of films. The movies aren’t all family or kid friendly but offer a nice free event for those looking for something to do in the area on a nice Friday night. Children under 15 must have an adult with them.

You can vote on the fan feature here, which consists of the following options:

The winner of the fan vote will be announced at the July 24th showing of Hook. Fan voting ends July 10th.

The free movies are brought to you by Downtown Grand Rapids Inc., Friends of Grand Rapids Parks, and Franklin Partners. The movies will be shown on a 50 foot screen beginning at dusk. Pre movie entertainment begins around 7pm on the event nights.

Attendees are encouraged to bring their own blanket, chairs, beer, wine, and snacks. No liquor is allowed and wristbands are needed for the consumption of beer or wine at the event. There are food vendors available. Last year’s crop of food vendors included Go Nuts, Spoonlickers, What the Truck, Woking Taco, Daddy Pete’s BBQ, Vito’s Pizza, Dorothy and Tony’s Gourmet Kettle Corn, and Ferris Coffee.

The 2014 lineup centered around the theme “Films Through Time”, which showed a movie focusing on each decade beginning with the 1940s. The movies were “Raiders of the Lost Ark”, “Grease”, “Dreamgirls”, “The Rocky Horror Picture Show”, “Top Gun”, “Jurassic Park”, and the fan voted “The Sandlot”.

As mentioned above, most of the movies are not kid friendly. E.T. and Hook were rated PG. Dirty Dancing had a PG-13 rating. The other movies were all rated R. We will be checking back soon with a list of other places in Michigan that show outdoor movies for free, which will also include better kid friendly ideas.

Tags: Ah-Nab-Awen Park, Downtown Grand Rapids, Grand Rapids, Movies in the Park
← Poptarko: The Pop Tart Taco You Can Enjoy at Battle Creek Bombers Baseball Games
May the Fourth Be With You – Celebrate Star Wars in Michigan Throughout 2015 →