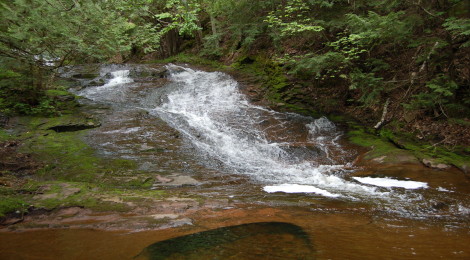 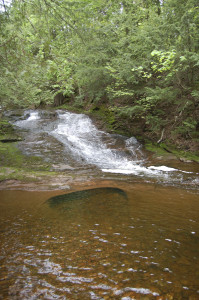 Located inside an outpost campground off of South Boundary Rd. in the beautiful Porcupine Mountains State Park, Little Union Gorge Falls slides shallow water over a 100 plus foot drop in a forested setting. It is a short hike to reach the start of the falls, and the trail follows the river bank for a quarter mile, intersecting several times with the Union Mine Interpretive Trail. Several sections of 10-25 feet highlight the area, thin water most of the year, most likely the best time to visit is in the spring. 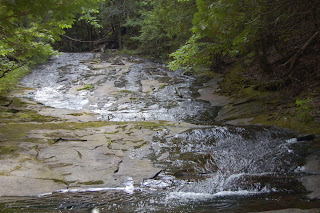 The rock is smooth and flat, so with the right shoes and a degree of common sense and caution, it is possible to get in the river itself and get a better, wider view while following the river upstream. 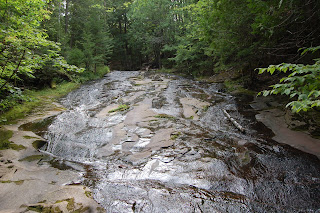 The first long drop has a small, three foot deep pool below it, adding to the calm of the area. When we first visited in the fall of 2009, no one was here – when we revisited in August 2012 the campground was full. When we came back for a third time in June 2014, we followed the river downstream instead of upstream, and found a handful of other drops. 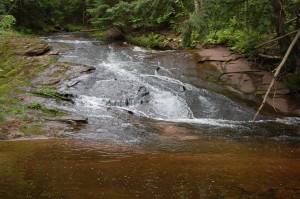 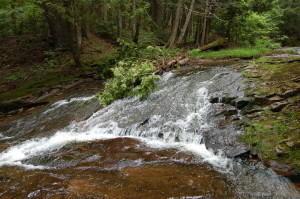 Directions: The Union River Outpost Campground is located off of S. Boundary Rd., a little more than a mile from the M-107/S. Boundary Rd. intersection at the PMWSP headquarters. Head into the campground until you reach an old bridge and look for parking nearby (crossing the bridge with a vehicle is not recommended). The main drop of the falls can be reached by taking the trail up the hill and to the right after the bridge, while the downstream falls shown above were reached by taking the trail to the left.