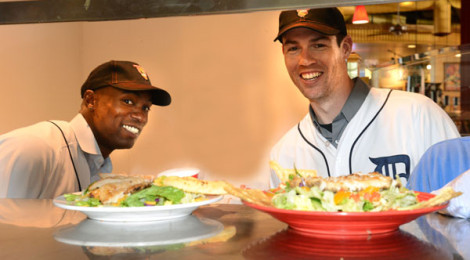 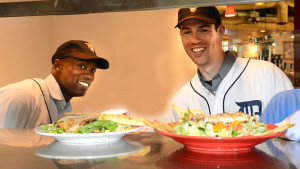 The Detroit Tigers set out on the road this week for its annual Winter Caravan event. Members of the team, along with coaches, and mascot PAWS will load up two large tour buses to travel around the state to interact with fans, sponsors, and the media. A full schedule (PDF) of events has been released and it includes several public events that can be attended by fans for free or by acquiring tickets.
Newly acquired Detroit Tigers members Alfredo Simon, Yoenis Cespedes, Anthony Gose, Shane Greene, Alex Wilson, and Josh Zied will all be part of the tour. Other Tigers like David Price, Ian Kinsler, J.D. Martinez, James McCann, Andrew Romine, Blaine Hardy, Tyler Collins, and Stephen Moya, will all take place in the Winter Caravan for the first time. Justin Verlander, a fan favorite, will return after missing most of last year’s event. Head Coach Brad Ausmus, president Dave Dombrowski, and former player/coach Alan Trammell will also be part of the tour.
Listed below are the public stops on the tour:
January 21: West Michigan WhiteCaps Winter Banquet in Grand Rapids. This is a ticketed seated dinner event at Devos Place. Members of the Tigers along with Dombrowski will be in attendance.
January 22: Buffalo Wild Wings in Rochester Hills (1234 Walton Blvd) – From 1:40 to 2:25 two Tigers players will serve customers. PAWS will also be in attendance. An earlier article on the Tigers site listed these players as Nick Castellanos and J.D Martinez.
January 22: Detroit Tigers Kids Club Rally (4:45 to 6:00) at Sterling Heights High School Performing Arts Theatre (12901 15 Mile Road). This is a ticketed event and seating is listed as limited. Players and PAWS will be in attendance.
January 22: Hockeytown Authentics in Troy (1845 E. Big Beaver Rd.) from 5:15 to 6:00. This short event will likely be a highly attended with photo opportunities promised with at least two Tigers players. Fans will get a ticket for a photo if they donate socks as part of Neighborhood Service Organization’s Homeless Recovery Program. Only 150 tickets (wristbands) will be given out. Distribution of wristbands begins at 4pm.
January 22: Toledo Mud Hens Event at Fifth Third Field (6:00 to 7:30 pm). This is a public, ticketed event that includes a seated dinner and a question and answer segment with players.
January 23: North America International Auto Show – Players will participate in a “Cars on Parade” event. The 3:15 to 4:15 pm appearance is open to the public.
January 23: North Michigan Rotary Club Alliance Business Breakfast (9:15 to 10:00 am) at Grand Traverse Resort and Spa. This is a public, ticketed event that includes Tigers players, coaches, and executives.
January 23: Zehnder’s Snowfest in Frankenmuth (2:00 to 3:00 pm). This is a public event with Tigers players that is welcome to the public. Guests are encouraged to donate items for care packages to be sent to troops overseas.
After all of the public stops, the buses will take the team to Comerica Park for the already sold out TigerFest on January 24th.
This year’s lineup includes several public events and also many that take place behind closed doors with sponsors and public employees. My disappointment in this year’s lineup would be the lack of interactive events at restaurants. The past couple of years have seen players serve at Red Robin, National Coney Island, Dunkin’ Donuts, and others. This year will only feature the stop at Buffalo Wild Wings. 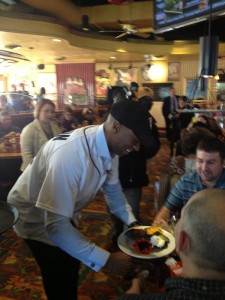 The Detroit Tigers kick off their 2015 season on April 6th with a home game versus the Minnesota Twins. While that game is months away, you can catch an early look at the team by attending one of these events. Follow the Tigers on Twitter and use the hashtag #DetCaravan to see and share pictures of your favorite Tigers players.