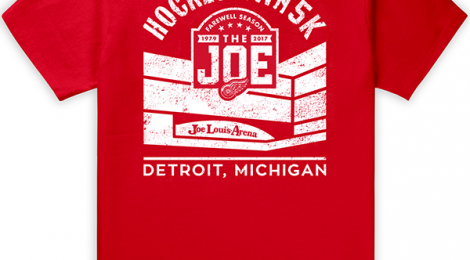 Detroit Red Wings Hockeytown 5K a Must Race for Fans

If you’re a Detroit Red Wings fan like I am, you’ll want to circle September 10th on your calendar. Better yet, you’ll go register right now to run or walk in the first ever Hockeytown 5K.

The Red Wings announced the first ever Hockeytown 5K The course for the Hockeytown 5K follows along the Detroit River and finishes inside Joe Louis Arena at center ice.

There are three packages to choose from to secure your spot as part of this wonderful event.

Both of these packages go up by $5 after June 30th. There is also an automatic group discount of $5 per person applied to groups of four or more participants.

Virtual Hockeytown 5K $55 – Includes commemorative t-shirt, racing bib, finisher’s medal all mailed to person. It is simply asked that you walk or run 5K close to the date of the event.

If you’re not big into running, but want to take part in this event, consider walking the course. This post-race festival promises to be one that Red Wings fans will remember forever. There will be current Red Wings players and alumni along the course cheering you on. They will also be part of the post-race festival. Photo opportunities will be available with players and also retired jersey numbers and championship banners normally in the rafters. Racers also have the opportunity to tour the Joe Louis Arena locker room. 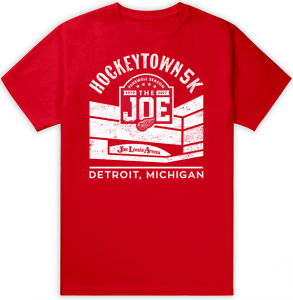 Prizes will be awarded to the top three finishers for males and females. Other prizes will be handed out to best dressed and best groups.

One of the coolest things about this race is finishing at center ice. Your name will even appear on the video board as you enter the arena. Fans and supporters can also sit inside Joe Louis Arena to wait for your arrival. Supporters can also watch a live stream on the website. 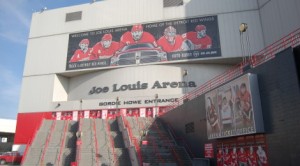 This event is one of many that kick off the farewell season for the Joe Louis Arena. The 2016-2017 Detroit Red Wings season is shaping up to be a great one with many events planned. After that season the Red Wings will move to their new home at Little Caesars Arena, or as we may soon be calling it, the Gordie Howe Arena. We recently named Joe Louis Arena as one of 16 places to visit in Detroit in 2016 and this would be a cool way to support that.

If you think a race that ends at a historic sports stadium is cool, you may also want to check out the Big House 5K in Ann Arbor, that ends on the field of The Big House.