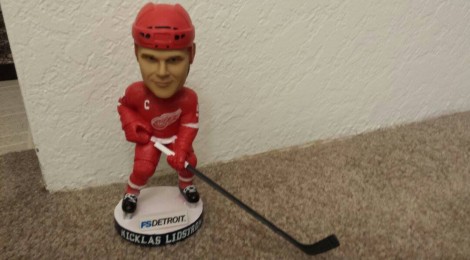 Hard to believe it’s almost the end of February. In the sports world, that means baseball is getting close to starting, with players arriving for spring workouts. It also means several sports are seeing their seasons come to an end. For the Detroit Red Wings, it means the 2014/2015 season is nearing an end as the team goes for its 24th consecutive season of making the NHL Playoffs. If you haven’t been to a game yet this season, there are still 12 home games left to attend. Many of those games are also promotional games and have giveaways that you might want to consider planning around.

Here is a look at the remaining home games for the Red Wings:

As you can see, the majority of the remaining home games have some type of giveaway. Two of the games left are kids days that could be fun to attend with young kids as their first or last hockey game. The other big highlight is the two bobblehead giveaways that remain for the players Danny Dekeyser and Gordie Howe. This marks the first bobblehead for Dekeyser and the Howe Bobblhead comes during a season that saw “Mr. Hockey” hospitalized and in a fragile state before receiving a stem cell treatment. On the season, the team also gaveaway bobbleheads of Justin Abdelkader, Jonathon Ericsson, and Gustav Nyquist. Bobbleheads remain a popular giveaway at sports stadiums as it marks a nice keepsake for fans. 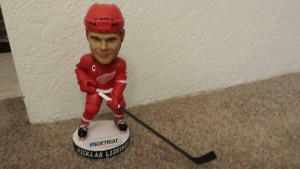 Nicklas Lidstrom Bobblehead From a Prior Season

The Detroit Red Wings currently sit in third place in their division, where the top three teams at the end of the season make the playoffs. In the Eastern Conference, the Wings rank fifth with 77 points, putting them in a good position to get one of the two remaining playoff seeds if they don’t finish in the top three of their division. The team has a 33-14-11 overall record heading into Tuesday’s contest in Los Angeles against the Los Angeles Kings. At home, the team has a 17-5-7 record.