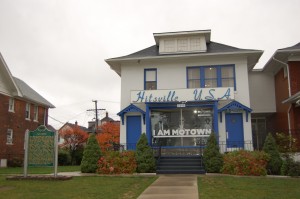 Detroit is known worldwide as the Motor City for its dominance in the automobile industry, but it is also home to one of the most successful record companies of the 1960s. Combining “motor” and “town” led to “Motown,” which became another nickname for Detroit and famous for a sound that dominated and influenced popular music for decades. Motown placed 79 records in the Top Ten of the Billboard Hot 100 from 1960 to 1969. Today, the site where these hits were recorded is open as the Motown Museum located at 2648 W. Grand Blvd. It features many exhibits and artifacts, including a restored studio. Find out more about visiting this iconic site at: https://www.motownmuseum.org/. A Michigan historical marker in the front yard provides a deeper look into Motown’s history: 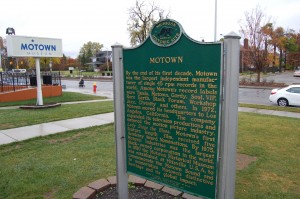 The “Motown Sound” was created on this site from 1959 to 1972. The company started with an $800 loan from the savings club of the Bertha and Barry Gordy Sr., family. Originally called Tamla Records, the company’s first national release was “Money (That’s What I Want),” in August 1959. The founder, choosing a name that reflected the Motor City, coined the word “Motown” for the company that was incorporated as the Motown Record Corporation on April 14, 1960. That same year it produced its first gold record, “Shop Around.” In 1968 the company, which had grown from a family-oriented business to an international enterprise, moved its business operations to 2457 Woodward. Motown provided an opportunity for Detroit’s inner-city youth to reach their full potential and become super stars. By the end of its first decade, Motown was the largest independent manufacturer of single 45 rpm records in the world. Among Motown’s record labels were Tamla, Motown, Gordy, Soul, VIP, Rare Earth, Black Forum, Workshop, Jazz, Divinity and others. In 1972 Motown moved its headquarters to Los Angeles, California. The company expanded its television productions and entered the motion picture industry. Lady Sings the Blues, Motown’s first feature-length film, received five Academy Award Nominations. By 1975, Motown Industries was the largest black-owned corporation in the world. In 1980 the Motown Historical Museum was established at Hitsville U.S.A. to commemorate the Motown Sound and to memorialize Motown’s distinctive heritage and its global impact.

Check out other Detroit Roadside Attractions: