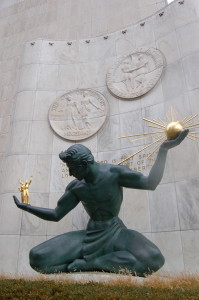 Few monuments in the state of Michigan are as immediately recognizable as The Spirit of Detroit in downtown Detroit. Dedicated in 1958, this bronze statue has been featured as a community symbol for decades, appearing on the logos of several city departments, featured in a chrysler commercial touting Detroit’s “comeback,” draped in sports jerseys during the playoffs, and even used on the crest for soccer team Detroit City FC (NPSL). The Spirit of Detroit can be found in front of the Coleman A. Young Municipal Center on Woodward Avenue, just north of Jefferson Ave.

Created by Marshall Fredericks, the 26 foot statue holds a golden orb in one hand and a group of people in the other. Restorations in 2006 ensured that future generations will be able to enjoy this monument moving forward. The wall behind the statue features a verse from 2 Corinthians (3:17), “NOW THE LORD IS THAT SPIRIT AND WHERE THE SPIRIT OF THE LORD IS, THERE IS LIBERTY.” A plaque in front of the statue adds, “The artist expresses the concept that God, through the spirit of man is manifested in the family, the noblest human relationship.” The seals of the City of Detroit and Wayne County are also found on the wall. 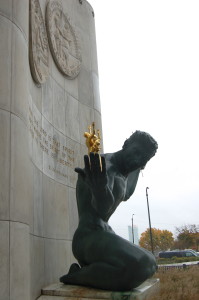