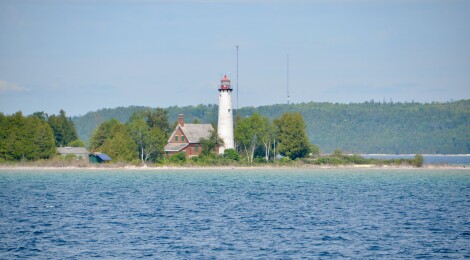 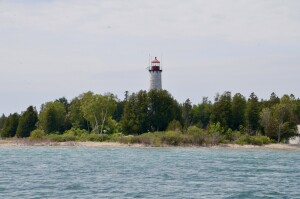 One of the greatest examples of lighthouse restoration and preservation in Michigan is the St. Helena Island Lighthouse in the Straits of Mackinac. While many other lighthouses like Crisp Point, White Shoal, North Manitou Shoal, and South Fox Island have seen time in the spotlight with their preservation efforts the work of the Great Lakes Lighthouse Keepers Association and other groups at St. Helena was one of the earliest examples of a project done right. This lighthouse is visible poking out above the trees as you look west while crossing the Mackinac Bridge or from the Upper Peninsula along US-2, including a rest area near Gros Cap. The best views of it come from a private boat or on a Shepler’s Lighthouse Cruise. We recently visited for the third time and will share some photos from that trip as well as some of the history we learned while on the cruise. 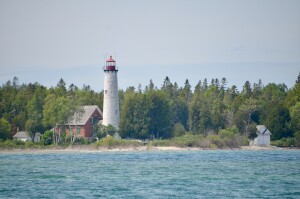 Construction on the St. Helena Island Lighthouse began in 1872 and the light was first lit in 1873. For about 20 years prior to that a small community had existed on the island with successful fishing and lumbering operations. A natural harbor on the north of the island had for many years provided safety for boats trying to wait out storms. As shipping on the Great Lakes continued to expand and traffic increased, the need for a light on the island to mark its dangerous and shallow shoals was brought to the attention of the right people within the federal government. 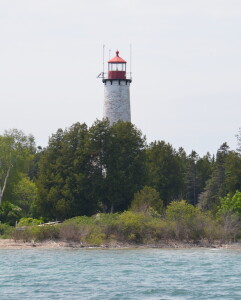 The St. Helena Island Lighthouse tower stands 63 feet tall. The white tower with its red-capped lantern room is connected to the keeper’s dwelling by a small covered walkway. The dwelling is quite an impressive structure “featuring a dining room, parlor, kitchen and office on the first floor, and four bedrooms on the second floor. A summer kitchen attached to the rear of the dwelling at grade level and a privy located approximately 30 feet behind the summer kitchen completed the station’s complement of structures.” An assistant keeper’s dwelling would be added, as well as an oil house to store the oils for the lantern. 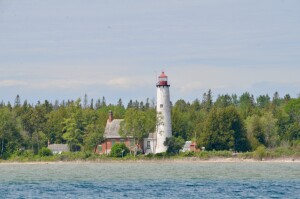 In 1922, this was one of Michigan’s first lighthouses to be automated and to lose its keeper. With a new “sun valve” lighting system, it was no longer necessary for a keeper to stay on the island, and those stationed at the Old Mackinac Point Lighthouse made trips out to check on it periodically. Over the next 50-60 years the boarded up lighthouse complex buildings had suffered at the hands of weather and vandalism, and at one point the Coast Guard even suggested demolishing everything. That’s when the Great Lakes Lighthouse Keepers Association stepped in and started a preservation project that continues to this day. 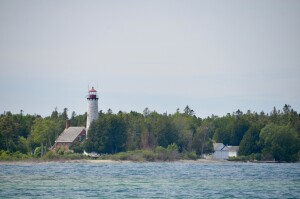 From the GLLKA: “After obtaining a license to restore the light station from the Coast Guard in 1986, GLLKA immediately took the abandoned lighthouse under its wing. With the help of a stalwart group of dedicated volunteers, work began on clearing years of accumulated debris and brush and securing the station for eventual restoration.” Many Boy Scout groups have helped with projects over the years, and a list of the Eagle Scouts who have earned that rank for projects at the station can be found at https://www.gllka.org/. The shallow water near the island makes things interesting for work crews, as they have to offload supplies from larger boats onto small rubber boats to bring things ashore. The rest of the island will be forever kept from development as it is now a nature preserve of the Northern Michigan Land Trust and Little Traverse Conservancy. 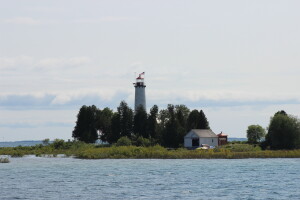 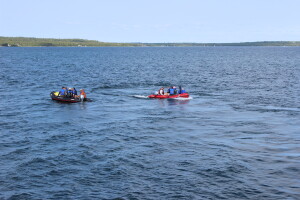 As the work here continues each summer, GLLKA offers a volunteer keeper program. You can find out more about that at https://www.gllka.org/st-helena-island-light-station. For more information on Shepler’s lighthouse cruises visit their website at https://www.sheplersferry.com/cruise/lighthouse-cruise-westbound/.