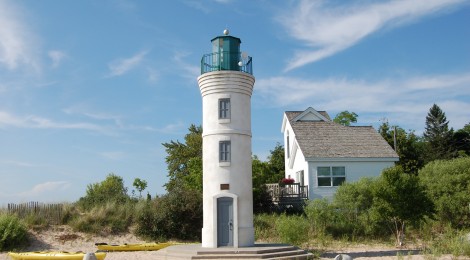 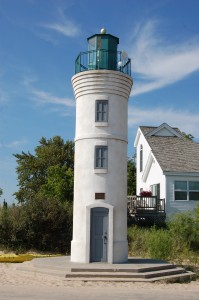 Michigan is home to more than 120 lighthouses, and one of the most amazing things when considering that number is that for the most part, each and every beacon is unique in some way. The Robert H. Manning Memorial Lighthouse in Empire isn’t the tallest, oldest or prettiest light on Lake Michigan, but it pays tribute to a local fisherman who passed away in 1989. This is one of just a handful of beacons in Michigan that are memorials, and it is worth checking out if you’re in Empire to check out the Sleeping Bear Dunes National Lakeshore. 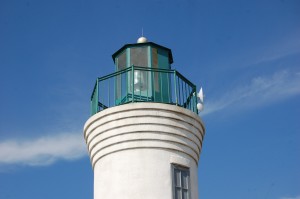 Built in 1990, this is one of the newest working lighthouses on the Great Lakes. It stands 38 feet tall and is constructed of wood with a light-colored stucco exterior. The lantern room is painted green, and the side of the tower that faces the parking lot has a door and two windows. A plaque above the door reads: “In Memory Of Robert H. Manning, Dedicated 1991.” 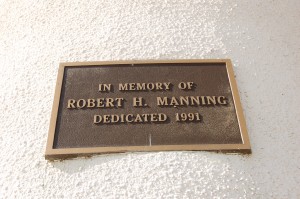 A Michigan historical marker by the park entrance gives a bit more history of the area and how busy it once was thanks to the lumber industry: “The Empire Lumber Company operated from 1887 to 1917, dominating this once booming lumber town. Empire, incorporated in 1895, derived its name from the schooner “Empire” which was icebound here during a storm in 1865. George Aylsworth operated the first mill between 1873 and 1883. Potter and Struthers built a second mill in 1885, which T. Wilce Company purchased in 1887. Called the Empire Lumber Company, it expanded to one of the largest and best equipped hardwood mills in the area, capable of producing up to 20 million feet of lumber a year. Docks, several businesses, and a railroad sprung up in Empire. Destroyed by fire in 1906, the mill was quickly rebuilt. The mill burned again in 1917. With most of the nearby virgin timber gone, the mill was not replaced. Empire is now a picturesque village near the Sleeping Bear Dunes National Lakeshore.” 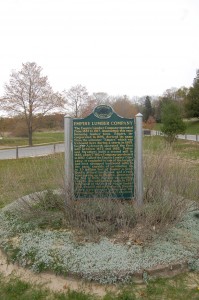 The Manning Memorial Lighthouse is located in Lake Michigan Beach Park, which also has a sandy swimming beach, boat launch, fishing area and picnic pavilion. It can easily reached from the junction of M-22 and M-72 by heading west on Niagara St. (two blocks north of the junction) to its end at the park.

You can also catch a view of the lighthouse from the top of the Empire Bluff Trail in Sleeping Bear Dunes National Lakeshore.