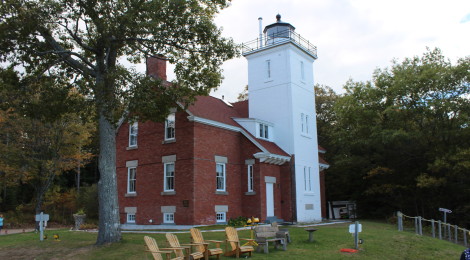 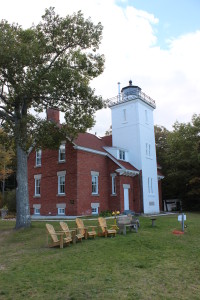 The 40 Mile Point Lighthouse will host an annual open house and arts and crafts show the weekend of May 27th and 28th. Events each day run from 10 a.m. to 4 p.m., with the museum, lighthouse tower and gift shop all open. Visitors are also welcome to check out the shipwreck along the beach, view the other maritime artifacts on the grounds and enjoy the beach on Lake Huron. 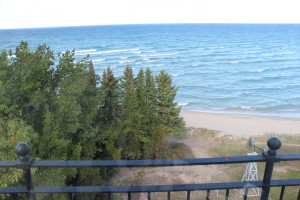 This historic lighthouse is named for the fact that it is 40 miles from Mackinaw City. When it was constructed, there were no lights between the Cheboygan Crib Light and the New Presque Isle Lighthouse. It was constructed in 1896 and it features a square white tower that is 52 feet tall rising out of a two-story brick dwelling. Automated since 1969, it is still an active aid to navigation and open as a museum during the summer. 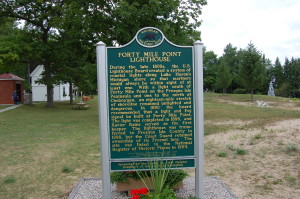 The Michigan Historic Marker about the lighthouse reads: “During the late 1800s, the U.S. Lighthouse Board created a system of coastal lights along Lake Huron’s Michigan shore so that mariners would always be within sight of at least one. With a light south of Forty Mile Point on the Presque Isle Peninsula and one one to the north at Cheboygan, and eighteen mile stretch of shoreline remained unlighted and dangerous. In1890 the board recommended that a light be built at Forty Mile Point. The light was completed in 1896, and Xavier Rains served as the first keeper, The lighthouse was transferred to Presque Isle County in 1998, but the Coast Guard retained ownership of its Fresnel lens. The site was listed in the National Register of Historic Places in 1984.” 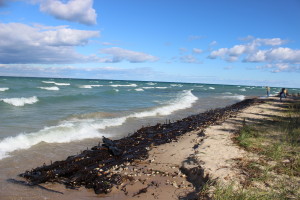 In addition to a beautiful stretch of Lake Huron beach, the lighthouse site is also home to the wreckage of the Joseph S. Fay, a steamer than ran aground here in 1905. Its wooden hull is visible on the beach, poking through the sand. Check out all of our photos below to see what the lighthouse complex has to offer, and be sure to check out our posts on nearby attractions:

5 Presque Isle Out Door Activities for a Day Trip