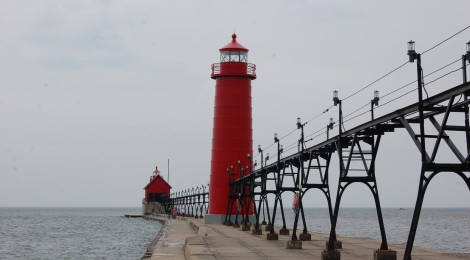 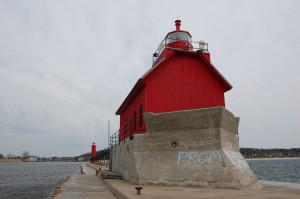 The Grand Haven Pier Lights are a pair of iconic pier lighthouses in Grand Haven, Michigan that mark the point where the Grand River meets Lake Michigan. This is one of the busiest channels in Michigan for recreational boating and fishing each summer. The inner light is a tall cylindrical tower, while the outer light is a lighthouse and foghorn on a large concrete base. Both iconic beacons are painted red, and have been a source of pride for the community for many decades. The pier the lights are found on is one of the busiest places in Grand Haven during summer months thanks to its location in Grand Haven State Park. 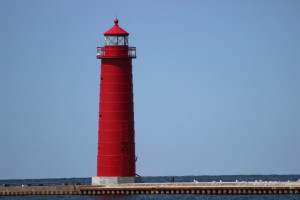 The first lighthouse was erected in the 1830s. The two current structures date back to the early 1900s. The outer light has a 36 foot tall tower and the inner light tower is 51 feet tall. Grand Haven is one of four places (Manistee Pierhead, St. Joseph Pier Lights, South Haven Pier Light) in Michigan that still has a catwalk in place. Many lighthouses used the catwalk so the keeper could get out and tend to the light even in bad weather, but as lights became automated many catwalks were deemed unnecessary and were removed. 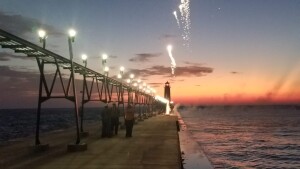 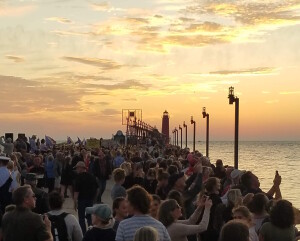 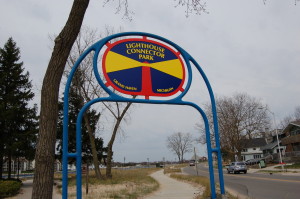 It is very easy to visit the Grand Haven Pier Lights. It is also possible to walk all the way out to them when weather conditions allow (this is done at your own risk). There is a parking lot at Lighthouse Connector Park (off of S. Harbor Dr. between downtown and Grand Haven State Park). You can also walk the boardwalk from anywhere in town and make a longer walk to the pier and lighthouses. Grand Haven State Park (recreation passport required) has a large parking area and it is easy to reach the lighthouses from there as well. 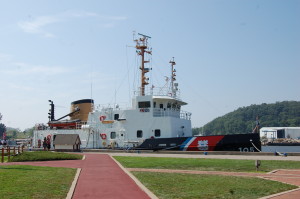 Grand Haven is known as “Coast Guard City USA” and hosts the Coast Guard Festival each August. This is a great chance to see ships from the U.S. Coast Guard and Canadian Coast Guard up close (some open for tours) with the Grand Haven Pier Lights in eyesight less than a mile away.