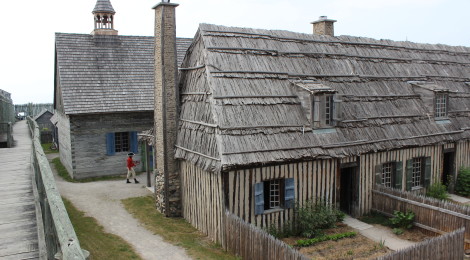 Present-day Mackinaw City’s location at the confluence of Lake Michigan and Lake Huron made it an important area from the early days of the state, and today many well-preserved historical landmarks remain. Fort Michilimackinac is one of several sites maintained as part of Mackinac State Historic Parks (Fort Mackinac, Old Mackinac Point Lighthouse, Mackinac Island State Park, Historic Mill Creek and the Manoogian Art Museum are the others) and takes visitors back in time to the 1700s when the fur trade was in full swing and the fort was an important trading post for the French and later the British. It was the site of a bloody battle between the Ojibwe and the British, and in 1781 it was replaced by Fort Mackinac on Mackinac Island. Today the fort is open as a museum with reconstructed buildings, live reenactments, musket and cannon firings and ongoing archaeological dig sites.

The Michigan historical marker in the park expands with more detail: “The British military abandoned and burned Fort Michilimackinac in 1781. Set aside as part of a village park in 1857, the fort site was placed under the direction of the Mackinac Island State Park Commission in 1909. In 1933 the fort’s stockade was rebuilt after the park custodian unearthed the foundations of the palisade. Always popular, especially among campers, the park saw visitation boom after the Mackinac Bridge opened in 1957. In 1959 professional archaeologists began investigation the site. Their findings prompted the dismantling of the stockade and reconstruction of the fort based on archaeological evidence. The excavation of Fort Michilimackinac is one of the longest ongoing archaeological projects in North America.” Excavation efforts continue to this day, and among the great finds in recent years are an 18th century sleeve button, a large ceramic shard, a crucifix, and a rosary that dates back to 1730-1750.

Find out more information about hours of operation, admission cost and see a site map at http://www.mackinacparks.com/parks-and-attractions/colonial-michilimackinac/ Here’s a look at some pictures from a 2015 visit, with thanks to Russell Katje.