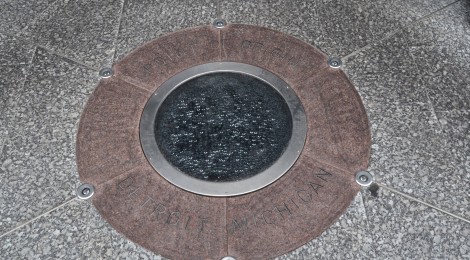 A trip to downtown Detroit may be confusing and overwhelming for first-timers, as you try and make your way down one-way streets that angle and curve through an incredibly busy and congested area. There was a plan when these streets were first put in place, and a monument in Campus Martius Park celebrates Detroit’s Point of Origin – the marker that was used in 1805 to lay out the city’s streets. The Detroit Point of Origin got a little extra attention this year, as a new plaza made the marker accessible to all in celebration with the 15th anniversary of Campus Martius Park. 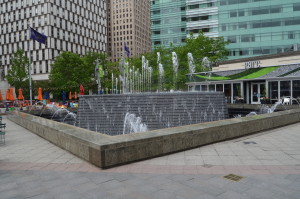 The point of origin marker is a granite post that is six feet tall, buried in the ground at the intersection of Woodward Ave. and Michigan Ave. A round pice of glass covers it at street level, with the words “Point of Origin” above it and “Detroit, Michigan” below it. The marker is located in front of Parc, a restaurant that has been open since 2016. “Parc is redefined contemporary Detroit cuisine.  Our approach to this concept is simple Detroit and Midwest flavors with influences of French and Mediterranean style.  Detroit, with its roots as a European city and leader of the industrial movement, has merged dining and food experiences from many cultures and geographic locations around the world.  Our concept, our menu, our ingredients, and our story, pay tribute to the rich multicultural history that our guests envision when walking into Parc.  From the sweet smoky aroma of our wood-fired Argentine Grill and prime dry-aged beef, the revolving seasonal menus presented by our culinary team, the spectacular views, and the gentle glow of our dining room, we strive to give a guest experience unlike any other in the city.” 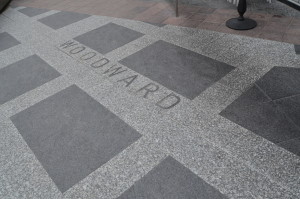 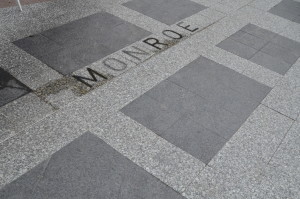 Campus Martius Park is close to many well-known Detroit sculptures, including Waiting by KAWS, the Spirit of Detroit, the Joe Louis Fist, the Woodward Fountain, and the Michigan Sailors and Soldiers Monument. In the winter it is home to an ice skating rink and in the summer it offers an urban beach. If you go check out Detroit’s Point of Origin, be sure to spend some time seeing everything else the area has to offer as well!