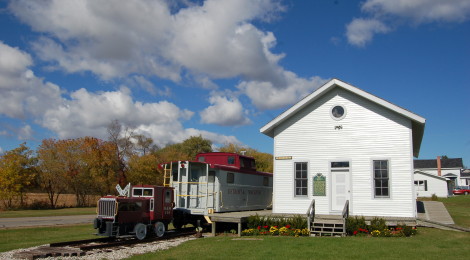 The Lincoln Depot (formerly called the West Harrisville Depot) is a historic train depot in northeastern Michigan that is now open as a museum during the summer. Along with the Sturgeon Point Lighthouse and the Old Bailey School this is one of three historic sites maintained by the Alcona Historical Society. The structure has been standing since the 1880s and one of few remaining depots of its kind left in the state. 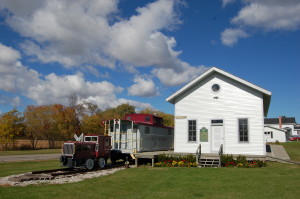 According to the Alcona Historical Society, train service came from the south and continued on north to the communities of Ossineke and Alpena. Operations continued here until 1929, and for a period of time this building was a private residence. A train car sits on a short set of tracks next to the depot – it is a 1925 D&M (Detroit & Mackinaw) Railway caboose that was donated and added to the site in 2003. In front of the caboose is a small red D&M switch engine, donated in 2008 by a private collector. Great detail was put into restoration efforts in hopes of returning the depot to conditions identical to its operating days.

The Michigan historical marker posted on the front of the building reads: “In 1893 lumberman and Civil War hero Russell Alger led the consolidation of several lumber railroads as the Detroit, Bay City, and Alpena Railroad, bringing passenger and freight service to this region for the first time. Built in 1886, the depot was taken over by the Detroit and Mackinac Railroad in 1895 and renovated in 1913. Service ceased in 1927 and from 1930 to 1996 the building served as a residence. Citizens saved the depot from demolition in 1997.”