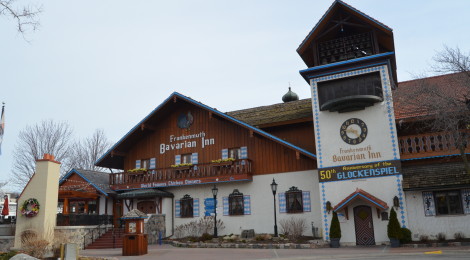 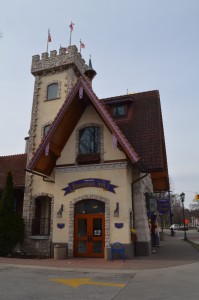 Frankenmuth is home to many wonderful places to visit, and the Frankenmuth Bavarian Inn in the heart of downtown is full of history and great food.  You can check out a menu at https://bavarianinn.com/ to see why this restaurant frequently rates among the most popular in the state. In addition to the Bavarian Inn Restaurant you can find the Bavarian Inn Lodge and Waterpark on the opposite side of the river, reached by crossing the Holz Brucke wooden covered bridge. The lower level of the Bavarian Inn features the Castle Shops, home to souvenirs, toys, candy, wine and beer, a bakery, and more. A two-sided Michigan historical marker next to the building gives more background and history of this landmark designed to temporarily transport visitors to Bavaria: 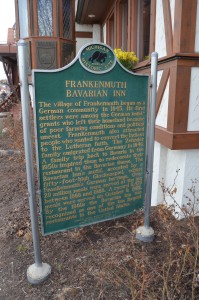 “The village of Frankenmuth began as a German community in 1845. Its first settlers were among the German immigrants who left their homeland because of poor farming conditions and political unrest. Frankenmuth also attracted people who wanted to convert the Indians to the Lutheran faith. The Zehnder family emigrated from Germany in 1846. A family trip back to Bavaria in the 1950s inspired them to redecorate their restaurant in the Bavarian theme. The Bavarian Inn’s motif, accented by a fifty-foot-high Glockenspiel, echoes Frankenmuth’s German heritage. Over 20 million meals were served at the inn between 1888 and 1988. A record 5,470 meals were served on October 9, 1982. By the 1980s the Bavarian Inn was recognized as one of the ten largest restaurants in the United States. 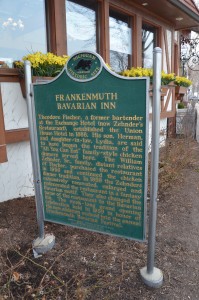 Theodore Fischer, a former bartender at the Exchange Hotel (now Zehnders’s Restaurant), established the Union House Hotel in 1888. His son, Herman and daughter-in-law, Lydia are said to have begun the tradition of the “All You Can Eat” family-style chicken dinners served here. The William Zehnder, Sr., family, distant relatives of Fischer, purchased the restaurant in 1950 and continued the chicken dinner tradition. In 1959 the Zehnders extensively renovated, enlarged and redecorated the restaurant in a fantasy Bavarian motif. They also changed the name of the restaurant to the Bavarian Inn. A week-long grand opening celebration held in 1959 in honor of the new addition evolved into the annual Frankenmuth Bavarian Festival.” 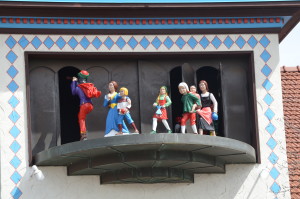 The Bavarian Inn also features a glockenspiel with an illuminated clock, a 35-bell carillon, and moving figurines – all imported from Germany. The figurines tell the story of the Pied Piper of Hameln four times each day (noon, 3 p.m., 6 p.m., 9 p.m.) and crowds gather to watch from the nearby sidewalks and parking lots. In 2017 the glockenspiel celebrated its 50th anniversary. Be sure to check out our list of 16 Things to See and Do in Frankenmuth for more ideas for your visit!