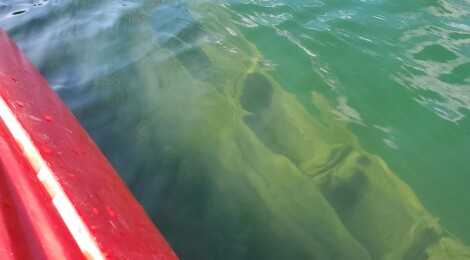 During a recent week-long vacation on beautiful Drummond Island, we were able to do quite a bit of exploring on both the inland trails for ORVs and the water trail that surrounds the island. This was one of the more beautiful places we have kayaked, and our trip out to the Drummond Island shipwrecks in Scammon Cove was one of the highlights of the whole vacation. Today we’ll share some photos of our visit to the wreck of the tug Silver Spray and give some details about this four mile paddle. 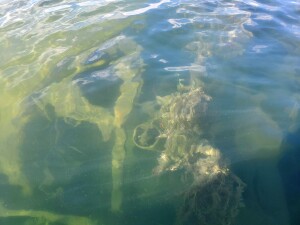 Drummond Island is a scuba diver’s paradise with 16 different shipwrecks (and a sunken construction crane) to explore. A few of these shipwrecks are visible in shallow water when conditions are right. The Michigan DNR recently launched the Michigan Shipwrecks Story App, which can be very helpful in finding which of our shipwrecks can be seen from a kayak. After spending our first few days paddling along the St. Mary’s River and the waters near our cabin on the island’s northwest side, we loaded up the truck and headed over to Big Shoal Bay Beach near the southeast part of the island to begin our adventure. 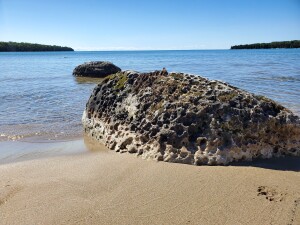 We launched our kayaks from the Big Shoal Bay Beach off of Big Shoal Bay Rd. From the Drummond Island Tourist Association: “​Big Shoal Bay Beach is considered a Township Park, but does not permit overnight camping.  The park has a good sized parking lot, out-door toilet, narrow sandy beach, picnic tables and spectacular vistas out through the islands of the cove.  On the beach you will find four enormous flat rocks which are very pitted but a great delight for the children.  The floor of the swimming beach is mostly sand with a few round pebbles.  The water does not deepen quickly, but be ever attentive to your children in the water.” 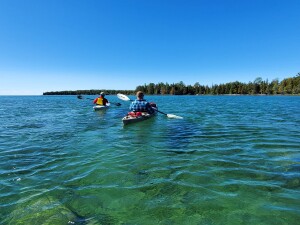 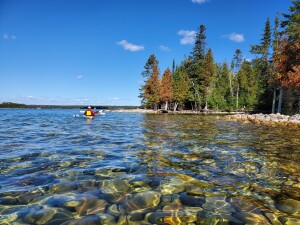 Our paddling route took us out of Big Shoal Cove and around Scammon Point. After rounding Scammon Point, we headed into Scammon Cove towards Johnswood and the remains of an old lumber mill. We knew that the trip would be about 3.5 miles each way, but we were surprised with how calm and shallow the water was on Lake Huron. It was easy to see just how rocky the bottom of the lake is here, and we began to get excited about how easy it would be to see the shipwrecks in the calm waters. (Below is a map of our route, using mapmyrun.com software) 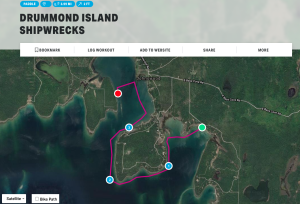 Once we got close to Johnswood and the wreck of the schooner barge Troy, a southern wind had picked up and made it much more difficult to see what was below the surface of the water. We pulled our kayaks up on the point near the old dock pilings and tried to get cell phone signal long enough to determine that we were in the right place. Our searches confirmed that we should be looking close to the old dock, and as we paddled back out we could see some of the wreck and a lot of debris in the water, though photographing here proved near impossible. The schooner barge Troy “is believed to have served as a lumber carrier for most of her career on the Great Lakes. Her dimensions were: length, 187.4 feet; beam, 30.6 feet; hull depth, 10.2 feet; and gross tonnage, 486 tons. Her final owner was the Kreetan Company of Drummond Island, which was a lumber company with headquarters and a lumber mill located at Scammon Cove, on the south and east side of Drummond Island. The vessel was reported as abandoned at the northeast corner of Scammon Cove in 1920.” 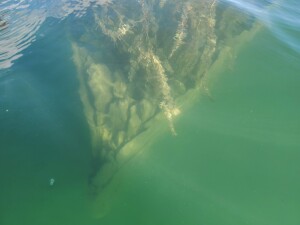 We now turned our attention to the waters just off Meade Island on the opposite side of the cove, and what looked to be a floating marker denoting the location of the other shipwreck. We paddled across the cove and were delighted at how easy this shipwreck was to see once we got over the top of it! The Silver Spray “was built at West Bay City, MI by F. W. Wheeler & Co for Henry Corcan of Eagle Harbor, MI.   Her dimensions were: length, 54 feet; beam, 15.8 feet; hull depth, 6 feet; and gross tonnage, 38 tons. From 1895 to 1924 the Silver Spray’s home port was Marquette, MI. During those years, she presumably was employed as a towing vessel on Lake Superior. From 1925 to 1939, she was owned by the Kreetan Company of Drummond Island. The Kreetan Company was a lumber company located at Johnswood on Scammon Cove near the eastern end of Drummond Island. The tug was abandoned near Meade Island on the west side of Scammon Cove when the Kreetan Company went out of business.” 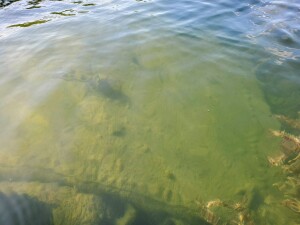 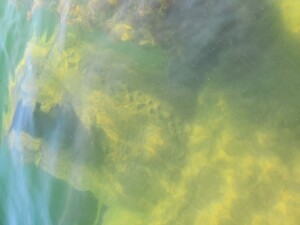 The clear water here allowed us to see the completely intact lower hull, the boiler, and even the details of some of the metal rivets still holding part of the ship together. There was a great deal of aquatic vegetation at the site, but there was no doubt that this was the shipwreck we had come looking for. We stayed and paddled around the wreck for about a half hour before deciding to start the long journey back (which did not go as planned, but that’s a long story for a different time), satisfied that a few hours of paddling had resulted in such a thrilling discovery.