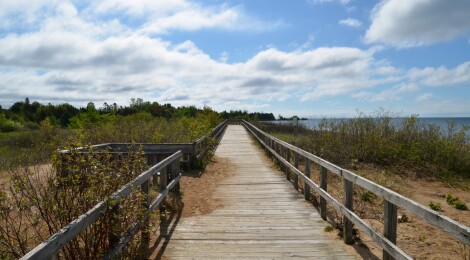 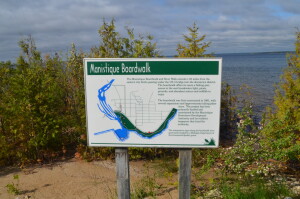 Michigan Trail Tuesdays is a new feature that will showcase a different trail or trail segment each week. The Mitten State is home to thousands of miles of trails, including the new Iron Belle Trail that runs from Detroit in the southeast to Ironwood in the western Upper Peninsula.

Manistique has long been a favorite vacation destination on the northern shoreline of Lake Michigan, thanks to its sandy beaches and close proximity to the Big Spring Kitch-iti-kipi, Indian Lake State Park, and other outdoor recreation opportunities. The Manistique Boardwalk Trail, although short, is a beautiful trail that showcase the city’s parks as it parallels the shoreline for close to two miles.

The trail’s west end wraps around the Manistique Marina, passes the Cedar Drive parking area access point, then heads through Lakeshore Park (West) with plenty of great views of the harbor and the historic Manistique East Breakwater Light. It then heads east through Carl D. Bradley Park before reaching its eastern end at Lakeshore Park (East). Its total length is only 1.83 miles, but it manages to provide breathtaking views for its entire length. 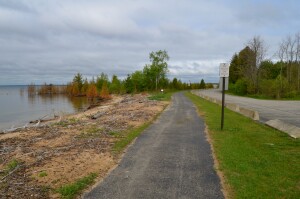 According to one of the informational signs along the trail, “The boardwalk was first constructed in 1991, with several expansions and improvements taking place since. The project has been primarily funded and maintained by the Manistique Downtown Development Authority and its resident taxpayers that fund the authority.”

The Manistique East Breakwater Light is easy to spot as you walk along the trail. “The steel plate constructed lighthouse, painted fire engine red provides safe passage to commercial and recreational boaters. The east breakwater light stands thirty-five feet tall, and was commissioned in 1915. The light was automated in 1969, and is equipped with a 300 mm plastic lens.” 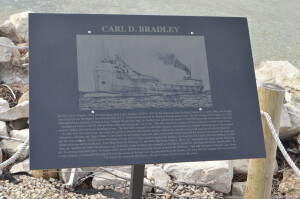 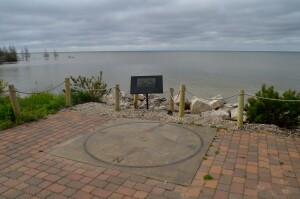 Carl D. Bradley Park is named in memory of those who lost their lives in one of Lake Michigan’s most well-known shipwrecks. The SS Carl Bradley was launched in 1927 and worked as a limestone carrier based out of Rogers City. For 22 years it was the largest and longest freighter on the Great Lakes. A storm in November of 1958 sank the ship and claimed the lives of 33 of its 35 crew members. 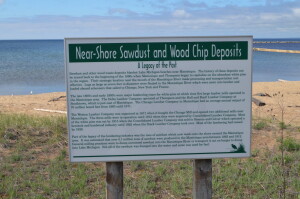 There are several informational signs along the boardwalk that tell about the history of the area, landmarks, landscape, and more. Manistique’s history is deeply tied in with the lumber industry in the area, so choosing to make most of this path a wooden boardwalk was a great tribute. Next time you’re in Manistique, be sure to stop by here to check out the lakeshore, catch a sunset, walk out to the lighthouse, fish, or have a picnic and relax! It’s almost impossible to miss the boardwalk when you drive through Manistique on US-2! 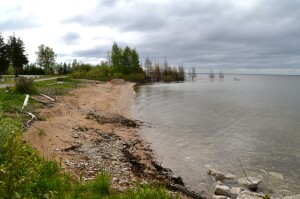