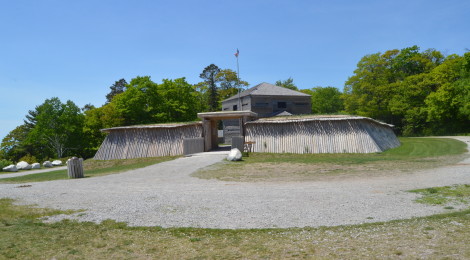 Visitors to Mackinac Island are greeted with stunning views on the ferry ride over from Mackinaw City or St. Ignace: the Grand Hotel, Mission Point Resort, downtown’s hotels and shops, and the white walls of Fort Mackinac up on a bluff overlooking Marquette Park. While Fort Mackinac is the island’s oldest fort (dating back to the early 1780s), it is not the island’s only fort. Fort Holmes is a small wood and earthen fort found on the island’s highest point. It can be reached by walking, bicycling, or on a horse-drawn carriage ride. The Michigan historical marker next to the fort gives some of its backstory:

“Here in 1812 on the island’s highest point, a blockhouse and stockade were built by the British and named Fort George. It was the bulwark of British defenses in 1814 when the American attack was repulsed. After the war the Americans renamed the post in honor of Maj. Holmes who was killed during the American assault in 1814. The fort was not maintained by the Americans however. The present blockhouse is not the original building.” 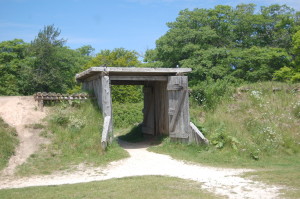 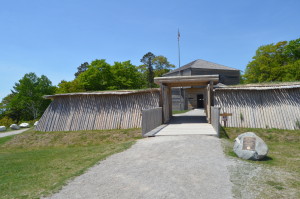 For many years this had been one of my favorite places on the island – the views were incredible, the crowds were far away, and the trip to this fort felt like a workout! Back then, Fort Holmes was mostly earthen mound walls and a wooden front gate. In 2015, a massive restoration effort led to the fort being returned to the way it looked in 1817. This marked the second time the fort had been rebuilt, as the WPA had previously restored it in 1936. 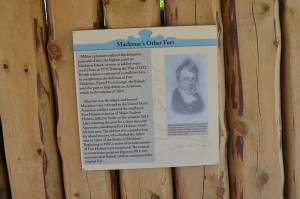 Inside the newly remodeled fort visitors will find several signs with more historical information. Topics include Exterior Defenses, Mackinac’s Other Fort, Interior Defenses, Fort Holmes Rises Again, Historic Site, The Heights Are Abandoned, Fortifying The Heights Of Mackinac, Fort George 1813-1815, and Fort Holmes 1815-1817. It was awesome to see the historical photographs of the fort and realize how great of a job was done in restoring it to its wartime appearance. 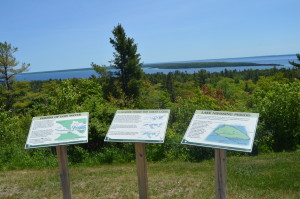 Outside of the fort is one of the great views on the island. From this high vantage point you can see downtown Mackinac Island, Round Island and the Round Island Lighthouse, Fort Mackinac, the Straits of Mackinac and the Mackinac Bridge, and more. Three informational plaques here tell how glaciers formed the Great Lakes and provide some geological history of the island. 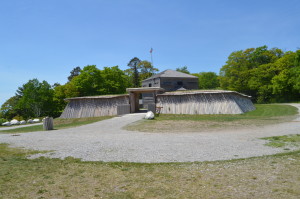 To get to Fort Holmes, head up the hill on Fort St. from Marquette Park and follow it to Huron Rd. Head towards Fort Mackinac on Huron Rd., then after the Fort turn left on Garrison Rd. Follow Garrison Rd. to its intersection with Rifle Range Rd. near Skull Cave. Take Rifle Range Rd. east for a short distance, where you will find a staircase that leads up to Fort Holmes. An alternative route involves staying on Garrison Rd. until it intersects Fort Holmes Rd, then following that road up and around to the fort (see map below).

12 Things To Do on Mackinac Island

Somewhere in Time Film Sites You Can Visit