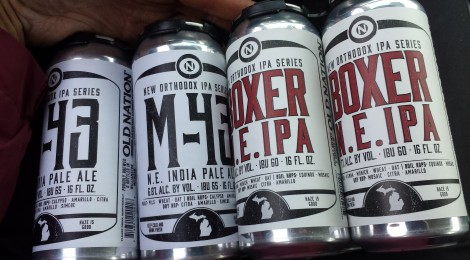 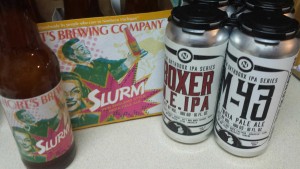 Thursday, August 3rd, 2017 is National IPA Day, a time for lovers of hoppy beers to celebrate. We’ll be drinking a few of our favorite Michigan beers to celebrate, and thought it was also time that we took a look at a shift in what brewers across the state have been cranking out. After years of hop-heavy, high-ABV beers from Michigan gaining national attention, the New England style IPA has seen a rapid increase in both availability and demand. Williamston’s Old Nation Brewing has led the way with their M-43 NEIPA, and many other breweries have followed suit with great offerings in the style. New England IPAs are known for being juicy, hazy and full of fruity and floral flavors. Best when enjoyed fresh, these brews also seem to be more accessible for drinkers who are normally turned off by a hop bomb. Many Michigan NEIPAs are available in cans or bottles, and below we’ll take a look at a few of our favorites. 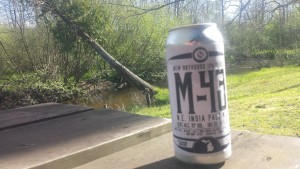 M-43, Old Nation Brewing Co. (Williamston) – This is the one that got things rolling, as Old Nation took a risk on a style not often found in Michigan. Their gamble paid off in a big way, and M-43 has gone from hard to find to being regularly stocked on most store shelves. From Untappd (where it holds a rating of 4.27/5): “The First release in Old Nation’s “New Orthodox” IPA series, M-43 is designed to accentuate the deep and complex character from the combination of Calypso, Amarillo, Citra, and Simcoe hops. Citrus and Tropical notes of Pineapple, Mango and Grapefruit come through in the huge, yet surprisingly delicate aroma. The flavor backs these aromas with a soft, pillowy mouthfeel. Hop bitterness is not particularly intense, which leads to a very drinkable, juicy IPA even non-IPA fans love. The Haze is not from yeast, but rather from an interplay of lipids from the malted oat and oils and acids which naturally occur in the hand selected Dry hops. This beer is a perfect interplay between top grade malt and hops, MI water and brewing technique which cannot be faked.” ABV 6.8%, 65 IBU 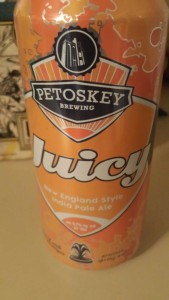 Juicy New England Style IPA, Petoskey Brewing – We’re big fans of Petoskey Brewing, and their juicy IPA did not disappoint. It also stands out on store shelves thanks to its bright orange can. “Bursting with rich, mouthwatering citrus and tropical aromas, our New England IPA is a mix of juicy flavors. This brew is a smooth-sipping, immensely hoppy, crushable concoction.” ABV 5.7%, 57 IBU 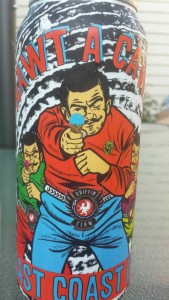 Slurm, Short’s Brewing Company – With a name that comes from my favorite episode of Futurama, I had to try out this offering from Short’s. “Slurm is a hazy, juicy New England style India Pale Ale. Light orange in color with a prominent haze, Slurm has aromas of pineapple and mango. Big tropical fruit flavors hit you up front and carry through to the finish. This easy drinking, medium-bodied New England style IPA has a slightly bitter, dry finish.” ABV 6.5%, 22 IBU

Sunday, May 21, we’re releasing cans of Boxer and Greenstone Pale Ale in the pub! Get the details > https://t.co/FJJ4qo1wkJ #MiBeer pic.twitter.com/OVd3SWvnWl

Boxer, Old Nation Brewing Co. – “The second in our New Orthodox IPA series. This NE style IPA has a bigger malt bill than the M43. We use Equinox and Mosaic hops in the boil. Then we dry hop with Mosaic, Citra, and Amarillo. The haze comes from the interplay of lipids from the malted oats, oils, and acids that occur in the hops. We don’t use any adjuncts or flour to create the haze, and we never will.” While M-43 has become a summer go-to for me for everyday drinking, I do enjoy mixing a Boxer in whenever I can get my hands on one. ABV 7%, 60 IBU 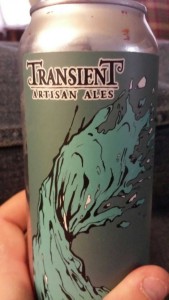 The Juice Is Loose, Transient Artisan Ales (Bridgman) – One of the earlier Michigan NEIPAs and one of the harder ones to track down outside of Transient’s pub, The Juice is Loose presents plenty of citrus flavor and haze. With a BeerAdvocate score of 95, this is one of Michigan’s highest-rated IPAs in any style. Feel free to insert any O. J. Simpson parole jokes here. 8% ABV 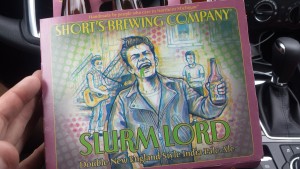 Slurm Lord, Short’s Brewing Company – In case Slurm wasn’t enough for you, Short’s recently released Slurm Lord, their double NEIPA “brewed with oats and a blend of Citra, Azacca, Amarillo, Galazy, and Mosaic hops. We’re excited to say that the brewing of Slurm Lord employs the largest dry hop to date in SBC history! Deep orange in color with a permanent haze and a minimal head, a glass of Slurm Lord resembles a glass of freshly squeezed orange juice. Aromas of dank passion fruit, mango, and pineapple are accompanied by bold flavors of citrus. This medium-bodied India Pale Ale is incredibly juicy from start to finish. A final sip leads into a slight, warming bitterness.” ABV 7.7%, 17 IBU

Need the Tweed? We’re on the case! More is in the kettle as of today. We’ll have a whole new batch for you soon! #MiBeer #HazeIsGood pic.twitter.com/zdBkKcBKBt

Boss Tweed, Old Nation Brewing Co. – Currently Michigan’s most sought-after IPA, Boss Tweed is Old Nation’s Double NEIPA. The brewery recently offered a ticketed release for those able to buy up to a case at the brewery, and tickets were gone fast. If you get the chance to get your hands on this amazing hazy, juicy brew do not hesitate! ABV 9.3 %, 63 IBU