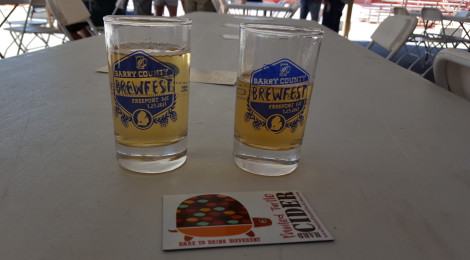 Barry County Brewfest a Must Attend for Michigan Beer Fans

The 2017 Barry County Brewfest tried to improve on its inaugural event and in our opinion more than accomplished this goal. The latest version of this small brewfest featured more breweries, more cider, mead, improved food, and focused on providing beers that you can’t find as easily in store.

We tried around 30 different beers at the Barry County Brewfest (see our preview) and were pleased to be able to try beers and ciders from some breweries that were new to us. The list of new to us places included North Pier (Benton Harbor), Painted Turtle (Lowell), Paw Paw Brewing (Paw Paw), Ridge Cider (Grant), and Glass Creek Winery (Hastings).

We arrived at the event right at the noon opening, which coincided with a large siren from the city of Freeport. We immediately started trying beers and started taking notes on what our favorites were and where we would head next. We attempted to try as many beers we had not tried before, which thankfully was easy with the large variety and inclusion of new and small breweries from around the state.

Three of us made five favorite beer lists from the event. These lists come with several asterisks, as we only list beers we tried at the event, which leaves out many great ones we had already had. We also did not include Railtown Brewery on any of the lists, as one of us works there. We tried to have different beers on each list to provide readers with 15 different new drinking options, which was hard as several beers and ciders were on each of our initial lists, but more on that later.

Among the 15 selected, Mr. Sunday, Porch Sittin’, and Dragon’s Breath appeared on multiple lists. Brite Eyes took two spots this year, after enjoying two of our top five spots last year as well. This was Jon and Allison’s first chance to try Brite Eyes and they were more than impressed. Paw Paw Brewing and North Pier were great new breweries for all of us. While we are not typically cider lovers, several of the offerings here were pleasantly received and I have to say that having numerous cideries represented is great for this brewfest. 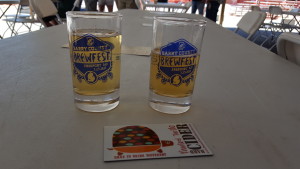 The Barry County Brewfest is smaller in size than the large Michigan Brewer’s Guild events, but that’s what makes it perfect for most Michigan beer drinkers. You can browse the entire selection and try most of the beers you have to without making a decision from 800 beers.

During the Barry County Brewfest we were able to talk to Travis Alden, President of the Barry County Chamber of Commerce and the man who holds this event together. He told us that this year’s traffic pattern was completely different. Last year saw a large portion of attendees coming right at the start, even though there was severe weather. This year, the fest got off to a slow start before filling out a couple hours later. Alden told us that there were more pre-sales for the 2017 Brewfest than for the prior year.

The 2017 Barry County Brewfest coincided with the Freeport Homecoming. The event will be held in a different city each year, an important way to drive traffic and awareness to local Barry County events. Alden told us the cities that will host the next two Barry County Brewfests and they will likely coincide with city celebrations.

Around 25% of pre-sale attendees last year provided feedback to the organizers. Alden said the biggest feedback was having more drinking options like cider and mead, and offering harder to find beers from breweries that can’t be found at the local grocery store. In our opinion, this feedback was taken to heart and made the second year fest that much better. 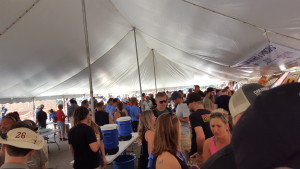 This event will continue to grow in size and is a must attend for Michigan beer fans. Barry County is perfectly located between Grand Rapids and Kalamazoo, two of the best beer cities in the country. With the help of distributors, this event is able to host some of the biggest and smallest breweries from the area and even pull one each year from the Upper Peninsula. While we would love to see many of our favorites back next year, we look forward to the continued variety of the event allowing us and beer fans the opportunity to try small breweries that may not have their beers in cans or bottles yet. Without visiting breweries, many fans don’t get the chance to sample these beers if not for great events like the Barry County Brewfest.

*Tickets for the Barry County Brewfest were provided to us from the organizers. All opinions expressed are our own*