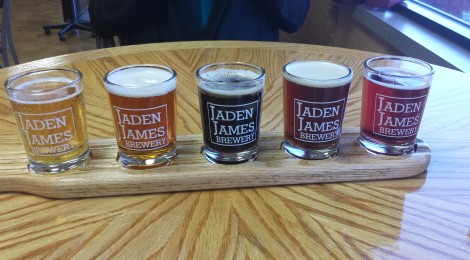 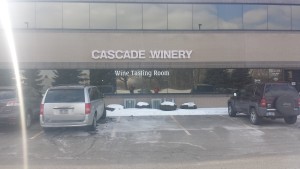 Jaden James Brewery looks pretty unassuming from the outside, which is why if you live in the Grand Rapids area you may have driven past it a few times and not even realized it. Turns out, you’ve been missing out on some good beers and quality cider if that’s the case. Jaden James is located on M-37/Broadmoor Ave./East Beltline just south of 44th St. on the bottom floor of an office-style building. The brewery is housed in the same building as the Cascade Winery, and this is a unique place where you can get a flight of beer, cider or wine. We went there last fall to try the Peanut Butter Porter – which was fantastic. I also recently returned to try a few more ciders and a couple new beers. 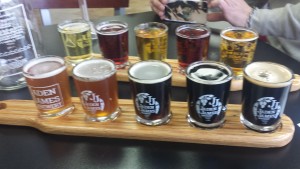 On our most recent trip we had a Groupon for two flights (5 per) of our choice. I went with five beers and my friend Aaron chose to try out five of their ciders. In my beer flight I selected the Apple Raz Ale, IPA, Black IPA, Peanut Butter Porter and Russian Imperial Stout. Aaron’s cider flight included Seasonal Pineapple, Cherry, Raspberry, Apple and Peach. 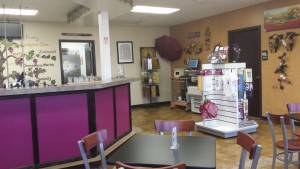 On the beer side of things the Apple Raz Ale was a great surprise, ending up as one of the better fruit beers we’ve tried recently. There aren’t enough good things to say about the Peanut Butter Porter, so I’ll just say you really need to try it. Their Russian Imperial Stout is solid as well, and really hides its ABV, and I had forgotten just how good and hoppy their IPA is. 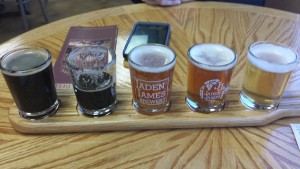 For ciders, the Raspberry was our favorite, but the Peach and Cherry were very good as well. For an added treat, we mixed a 1/4 flight glass of the Raspberry cider with 1/4 of the Peanut Butter Porter for a PB & J style experience. On our first visit we also tried the Gluten Free Ale, which is quite popular locally because so few breweries offer that option while still maintaining a pleasant flavor. 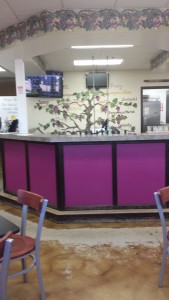 We’ve enjoyed both visits here, and both times have had attentive, knowledgable service. There’s plenty to try here and something for everyone. Keep an eye on Groupon for deals, and watch Twitter and Facebook for updates of what’s on tap for the week or when specials on growler fills are running.