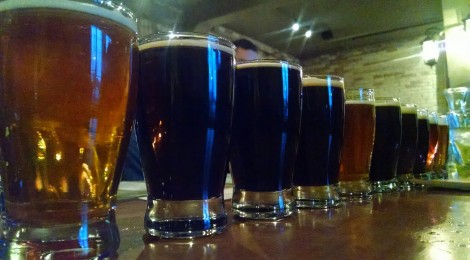 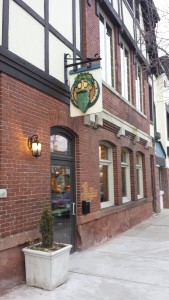 Our latest beer adventure saw us visiting Harmony Hall on Grand Rapids’ rebounding West side, and a 2015 addition to the local beer scene by Harmony Brewing Company. Last year we visited Harmony’s East Grand Rapids brewpub, and we were pretty impressed with the beer selection and the pizza. Harmony Hall is located in the former Little Mexico building, and draws menu inspiration from German beer halls. You’ll find several beers at both locations, but Harmony Hall boasts a much larger tap list full of small batch brews and seasonal specials. 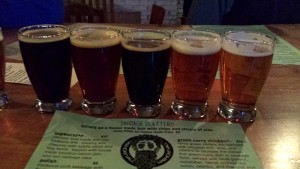 We had a 10-person group, which made it easier to order several flights and trade beers back and forth so everyone could find one (or several) that they liked. We tried Li’l Sebastian (Session IPA with Michigan Columbus hops), King’s Highway (Double Rye IPA), Ale-ian Abduction (Black IPA), REO Speed Dragon (Imperial IPA), Birthday Barleywine, Darth Daddy (Black Cream Ale), Tupelo Honey, Aphrodisiale, Li’l Al (session porter), Deep End Imperial Stout, Heather Beast (gruit), and Fee D’hiver (Belgian Strong Dark Ale). Mainstays like Fiddlestix IPA, Brownson Brown, Grapefruit Moon (grapefruit IPA shandy) and Golden Lion Tamarin (pale mild) were new to most of the people in our group and were generally well received. Standouts for us included the Birthday Barleywine, REO Speed Dragon, and Li’l Al. This larger location allows Harmony to brew many different beers, so chances are the tap list will be a little different each time you visit. 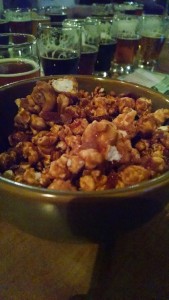 For food we started off with a few appetizers. The soft pretzels with beer cheese were a big hit, and we thought the bacon cashew caramel corn was amazing. Other options include braunschweiger dip and barmix. 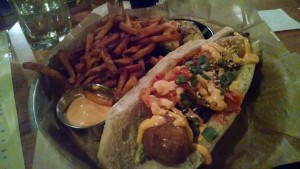 Since Harmony Hall’s reputation has been built on sausages, we knew that was what we were going to try. I opted for the Hopwurst, which features a cheddar brat made with Fiddlestix IPA on a house made bun and topped with red cabbage slaw and house made bourbon bacon jam. Paired with amish potato salad, this was a great meal and a respectable serving size for ten dollars. Allison went with the Bulgogi, a Korean BBQ beef and pork sausage on a house made bun, topped with local greens, kimchi, chili aioli, green onion and sesame seeds. The food here was impressive, and definitely lived up to its reputation. 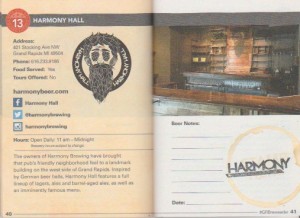 Harmony Hall is one of the 23 stops on the “Beer City Brewsader” passport program for Grand Rapids and the surrounding area. Find out more about how to get a book and where to get it stamped in our article from last year, and after visiting eight participating locations you’re eligible to receive a Beer City Brewsader t-shirt. 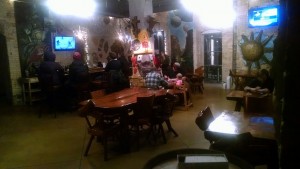