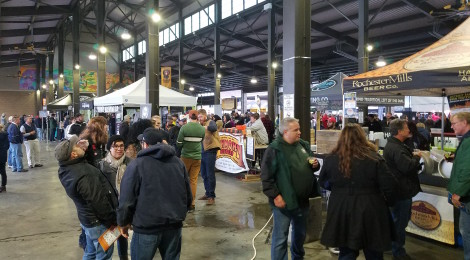 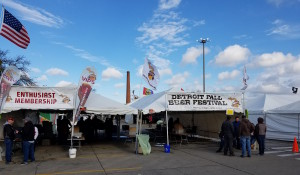 The 2017 Detroit Fall Beer Festival was held Friday, October 27th and Saturday, October 28th at the Eastern Market. Thousands of people braved rain and cooler temperatures to check out more than 700 beers served up by more than 80 different Michigan breweries. We love the Michigan Brewers Guild festivals, and one of our goals at this one was to focus on trying beer from breweries on the east side of the state. While we enjoy Founders, Perrin, Bells and others we have plenty of opportunities to try their beers and/or visit their breweries in our own backyard. We don’t make it to Detroit, Ann Arbor and other areas as much as we’d like to, and this festival gave us the perfect chance to make up for that. Since this was a fall festival there were plenty of pumpkin beers, oktoberfests, porters and stouts available. Other trends that we saw continue at this festival were well-made sour beers and quite a few juicy New England style IPAs. Here’s a look at some of our favorite beers from the festival and some breweries we tried out for the first time. Cheers! 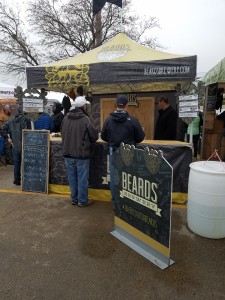 10 of our favorite beers – we tried nearly 60 samples over the course of the festival, sampling brews from more than 40 different breweries. Here are the ones that stood out the most:

Flavorful Five, ROAK Brewing Co. – it was great to finally get to try this New England Style double IPA, which features Amarillo, El Dorado, Galaxy, Citra and Azacca hops. It was juicy and full of delicious citrus and hop flavor, everything I want in a NEIPA.

Double OH C.P., Pigeon Hill Brewing Company – O.C.P. (Oatmeal Creme Pie) was already one of our favorite beers from Muskegon’s Pigeon Hill, so when we had the chance to try a double version of it we were excited. This delicious brew was incredibly sweet but well balanced, and it clocks in at 11% ABV.

Arabicadabra, Bell’s Brewery – while the newest offering from Bell’s has been on retail store shelves for a few weeks now, this was our first chance to try it out. This 5.5% ABV milk stout comes through with a bold coffee flavor, thanks to coffee beans from Grand Rapids’ Ferris Coffee. We’ll definitely be going through a few six packs of this during the winter months!

Pretty Fly for a Wheat Chai, Eternity Brewing – not only was this one of the more fun names for a beer at the festival, it was also one of the best tasting beers. This dark wheat ale uses a chai spice blend to create a great flavored beer with a low ABV.

440 Pepper Smoker, Original Gravity Brewing Company – After having tried a few other pepper beers at the festival (one was too hot, another had no heat), this one got it all right! This amber ale managed the right mix of jalapeno peppers and smoked malt and was delicious.

Harvesting Beats, HOMES Brewery – the first thing that stood out with this sour beer was its red color. Brewed with coriander and orange peel and aged on beets, it had an earthy flavor that was pleasant and balanced out by hints of fruit. Both unique and tasty!

Mango Lime Gose, Witch’s Hat Brewing Co. – this one was everything I want in a gose, with plenty of sour flavor and an excellent blend of fruit.

Bourbon Imperial Screamin’ Pumpkin, Griffin Claw Brewing Co. – there were pumpkin beers just about everywhere we looked at the festival, and while we tried a handful there was no doubt which one was the favorite. There’s good reason this was the highest rated Michigan pumpkin beer on Untappd last year, as it combines pumpkin spice and bourbon flavor in a 9% ABV brew that tastes amazing.

Incipient (Sweet Cherry), Speciation Artisan Ales – there’s a reason the Speciation booth had a line all weekend, and that’s because they’re continuing to grow their reputation of being one of Michigan’s premier brewers of sour beers. This one had plenty of cherry flavor and made me want to check out more bottles from Speciation.

10 “New To Us” Breweries that we enjoyed – each festival we attend, we make it a point to check out breweries we haven’t yet had the chance to visit. Here’s some of the Detroit Fall Beer Festival attendees that we were surprised by and a look at which of their beers we tried out.

HOMES Brewery (Ann Arbor) – We enjoyed the New Wave IPA (a collaboration with Transient Artisan Ales) and the Harvesting Beats sour ale. Can’t wait to head over to Ann Arbor and try out more from this brewery that opened this spring. Another reason to love these guys: HOMES is an acronym for the Great Lakes! (Huron, Ontario, Michigan, Erie, Superior)

Speciation Artisan Ales (Comstock Park) – Even though they’re practically in our backyard, we hadn’t yet tried out much from this up-and-coming maker of great sour beers. We loved the Sweet Cherry Incipient and the Tequila BA Incipient with Blueberries, Limes and Salt. If you want to try out samples from Speciation at a festival my advice is to get there right away – they had lines all day and had run out of beer by mid-afternoon on Saturday.

River’s Edge Brewery (Milford) – we don’t often come across schwarzbiers, so when we saw River’s Edge’s Sword in the Skull we knew we had to try it. We loved this well-balanced, flavorful, smoky beer and we were likewise impressed with the Barrel Aged Dirty Frank, a stout full of rich flavor.

Wolverine State Brewery (Ann Arbor) – This Ann Arbor brewery only makes lagers. From what we tried, that choice seems to be working out well for them as they clearly know what they’re doing. I really enjoyed the Raucher, a smoked beer that took home a bronze medal at the 2016 World Beer Cup. Massacre, a 14.5% ABV dark lager aged in bourbon barrels, had great flavor and was easier to drink than its ABV would lead you to believe.

Bastone Brewery (Royal Oak) – one of the few Oktoberfest beers we tried came from Bastone, and we enjoyed their Belgian-style offering for being a bit different than what we’re used to in this style. We also tried out the Cafe Blanca, which was a delicious coffee-heavy Belgian Blonde.

Watermark Brewing Company (Stevensville) – We tried Bert’s Breakfast Stout, a coffee stout with great flavor and a deceptive ABV (10%). Next up was Ghostmeal, which was a flavorful hazy pale ale. We finished things up with King Prawn a hazy, juicy IPA that was loaded with flavor.

Eternity Brewing Company (Howell) – Pumpkin Muffin ended up being one of the best pumpkin beers we had all weekend, and Pretty Fly for a Wheat Chai not only has an amazing name but a unique and pleasant flavor.

127 Brewing (Jackson) – The 127 Apricot Pale was a solid offering with just enough fruit flavor, and the 127 Oktoberfest was quite possibly the best marzen we found over the course of the festival. 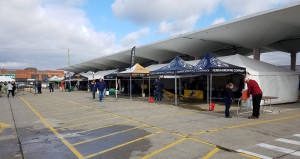 As usual, we found that the MBG did a great job of running a fun, friendly, efficient event. It’s always exciting to try new things from new breweries, and it was great to see a resilient crowd make the best of some inclement weather. Next up for the Michigan Brewers Guild is the 2018 Winter Beer Festival (13th Annual) at Fifth Third Park just north of Grand Rapids. We’ve enjoyed every minute of the WBF the past two years, you can check out our 2016 review and 2017 review to help get excited for next year’s event. Tickets and more information can be found at http://www.mibeer.com/winter-festival.