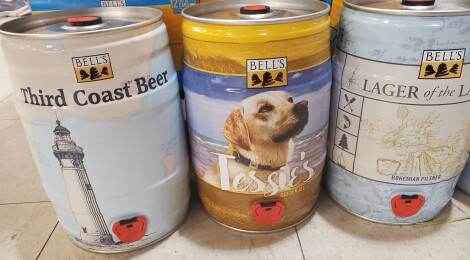 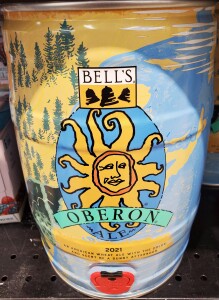 Bell’s Oberon has been released in special 5 liter mini-kegs each year for the past 20-plus years, with many unique designs. This year, the flagship beer of summer in Michigan is joined by three other beers available as 2021 Bells Mini Kegs. Each of these four beers is partnered with a charity as part of the Mini Kegs for Causes campaign, described by Bell’s as an effort “to help raise awareness for organizations that support causes that are important to us and our President and Founder, Larry Bell.” We love Bell’s beer and we love helping out good causes, so let’s take a look at the four beers that were distributed into stores starting in May, as well as what causes each will be helping support.

Tessie’s Golden Ale (Midwest Labrador Retriever Rescue Association) – This beer had previously only been available at the brewery in Kalamazoo, and is partnered with a great animal organization as a nod to the many people that adopted pets in the last year while stuck at home during a pandemic. 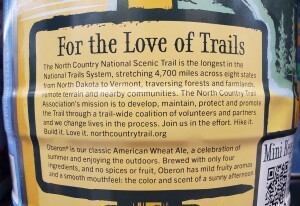 Oberon Ale (North Country Trail Association) – This year’s sharp looking Oberon mini keg is helping to support the North Country Trail Association, which helps maintain and develop a 4,700 mile trail that stretches across eight states. Michigan has more mileage on the trail than any other state and the NCTA headquarters are located in downtown Lowell. 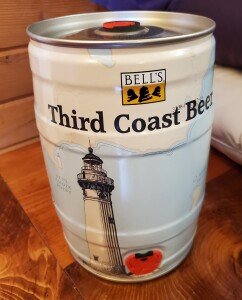 Third Coast Beer (Seul Choix Pointe Lighthouse) – This was the first mini keg to catch my attention, as we found it in Marquette while stocking up on Upper Hand Brewery beers at Tadysch’s EconoFoods. It was great to see one of our favorite Upper Peninsula lighthouses featured on a mini keg, and even better to see the Seul Choix Pointe Lighthouse and Gulliver Historical Society getting some financial help after 2020’s pandemic wiped out most of their usual income.

You can check availability of mini kegs at https://pickup.bellsbeer.com/collections/cans-bottles. A limited amount of each were produced and distributed so make sure you pick one (or four) up when you find these great Bells Mini Kegs.