Downtown Detroit is home to many iconic pieces of art, and a 2018 addition – “Waiting” by KAWS – seeks to someday be included on a list of icons that includes the Spirit of Detroit and the Joe Louis Fist. The Waiting sculpture is located in front of One Campus Martius overlooking Campus Martius Park, in front of an office building that houses Quicken Loans, Microsoft, Plante Moran, Compuware, and more. The sculpture was paid for by Quicken Loans founder Dan Gilbert and his wife Jennifer. The 17-foot-tall sculpture was created by artist Brian Donnelly under the alias of KAWS. 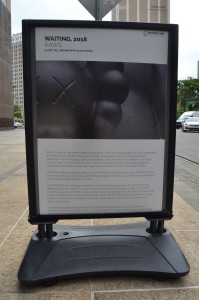 A sign near the sculpture gave a little more background on KAWS’ work and what the addition of this art hopes to bring to Detroit. “KAWS is one of the most widely recognized artists of his generation, and has expanded the definition of contemporary art through accessibility and an unprecedented abstraction of the language of contemporary culture. KAWS has created a visionary body of work over the last 20 years that has attracted brands, designers, galleries, young and old alike, and his openings across the world draw thousands of fans. Waiting features a figure known as Companion who has been part of KAWS’ vision since the early 90s when the artist first assimilated him into bus shelter advertisements and billboards around New York City. Companion is a nostalgic character in the process of growing up, and the figure’s relationship to its maker falls somewhere in the realm of avatar or inner child, often mirroring aspects of KAWS’ personality and journey through life. Waiting stands tall at 17 feet outside One Campus Martius and marls the first placement of this new design: a parent and child in a moment of pause, composed of over 2 tons of bronze with black patina finish.” 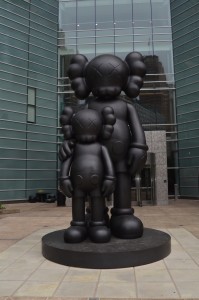 Characteristics of this piece that also appear in other work by KAWS include the X’d out eyes, skull-and crossbones heads, and a similarity to cartoon character Mickey Mouse. You can see more of his work at http://www.artnet.com/artists/kaws/.