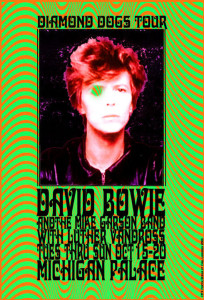 On January 10th, legendary musician David Bowie lost a secret 18 month battle with cancer. Tributes continue to pour in from fans and fellow musicians. Along with the outpouring of quotes and nice messages of what Bowie’s career meant to people, there are events starting to take hold that will allow people to gather to pay tribute. 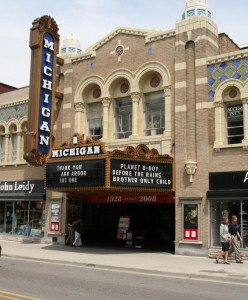 David Bowie played numerous Michigan shows throughout his long musical career. His first Michigan concert was in October of 1972 at the Fisher Theatre in Detroit. What stands out is the six night stand at the former Michigan Palace held October 15th through 20th in 1973. Bowie’s last Michigan show took place in 2004 at the Palace of Auburn Hills. That concert featured a massive 32 song performance with an amazing setlist of hit songs. Check out Setlist.fm and their coverage of 26 Michigan Bowie concerts.
Check out our list of Michigan events and places to celebrate all things Bowie.

January 15: Labyrinth and The Man Who Fell to Earth at Redford Theatre in Detroit

The historic Redford Theatre opened its doors in 1928. On Friday January 15th the theatre will host a great tribute to David Bowie with the screening of two of his most iconic films. At 8pm, the theatre will show “Labyrinth”, the 1986 film that starred Bowie as Jareth the Goblin King.
At 10:30pm, the theatre will show the 1976 movie “The Man Who Fell to Earth”. This R rated movie starred Bowie as Thomas Jerome Newton, an alien searching for water on Earth to save his dying planet.
Tickets for each movie are $5 and must be purchased for each event individually. Tickets went on sale Wednesday night and will likely sell out. The theatre holds an estimated 1610 people. Check out the event page for more details.

January 19: Labyrinth: One Night Only at UICA Grand Rapids 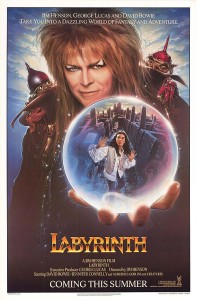 Don’t miss this opportunity to see the cult classic “Labyrinth” on the big screen. A selfish 16 year old girl is given 13 hours to solve a labyrinth and rescue her baby brother when her wish is for him to be taken away is granted by the Goblin King.
The movie features many songs from Bowie including the very catchy song “Magic Dance”.
“You remind me of the babe. What babe? The babe with the power. What power? The power of voodoo. Who do? You do. Do What? Remind me of the babe.”
The event is at 8pm and tickets are $4 for members and $8 for non-members. Tickets will be sold on a first come first serve basis. Check out the event page on Facebook for more details. 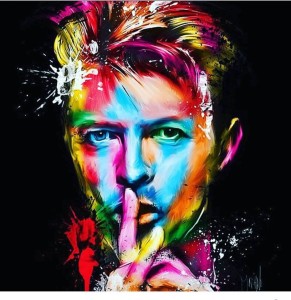 The Park Theatre in Holland is hosting an event to honor David Bowie. It is part of their periodic “Bar Nights” events. The event will begin at 8pm and is open to all ages. Enjoy the backdrop of handpicked David Bowie videos while playing board games and hanging out with friends. A full bar will be available. Event is free, but a free will donation will be available to benefit the Save the Park Campaign. Check out the event page for more details.

If you have more events to add, please comment below or email us at travelthemitten@gmail.com