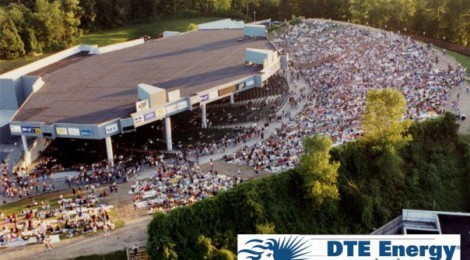 Several concert announcements were made back in 2014, but a handful were just made this week for DTE Energy Music Theatre. The amphitheater in Clarkston, Michigan is one of the premier outdoor venues for artists and continues to show a strong lineup year after year. DTE ranks as one of the top five most attended amphitheaters every year and this year’s lineup should definitely help with that once again.

Many can remember back before companies paid millions for naming rights and the location, which opened in 1972, was called Pine Knob. Now, with the ownership by Palace Sports and Entertainment since 1990, the venue can seat 15,274 people each concert (7202 pavilion, 8072 lawn).

That is an exciting lineup that offers a little bit of everything for music fans. There’s classic rock, metal, rock and roll, country, alternative, and new. There’s also a wide range of pricing options, giving all customers a chance to attend some of their favorite concerts this summer.

I am guessing there will be more dates and artists added and we will attempt to keep this updated. While it is not listed on the Palace site, I have found elsewhere the May 22nd kickoff with Eddie Money. This should come as no surprise, as the “Two Tickets to Paradise” singer has performed every year at the venue since 1989, with 1995 being the lone exception.

DTE Energy Music Theatre continues to be a great destination for artists and consumers alike. Several of these artists have not only played at this venue but also have recording history there as well. Barenaked Ladies recorded their DVD “Talk to the Hand: Live in Michigan” there. Peter Frampton released a live DVD from his 1999 Pine Knob performance. Steely Dan had four tracks on their “Alive in America” album come from their 1994 Pine Knob appearance.