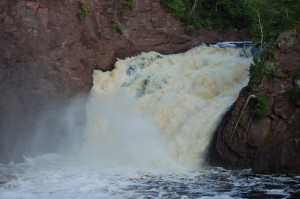 One of several beautiful falls on the Montreal River (which forms the border between Michigan and Wisconsin), and one of two that access to has been recently improved by XCel Engergy, Superior Falls is a roaring gem reached by a short semi-difficult hike.

The first time, I visited Superior Falls (and according to the Penrose directions), it was viewed from an observation area near the top of the power station, providing a stunning and distant view of the falls. Below is a recent photo from a visit in August of 2015: 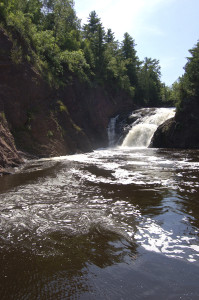 On our return visits dating back to 2012, we found that a path leading to the base of the falls was open, providing an amazing view of the cliffs along the Lake Superior shoreline: 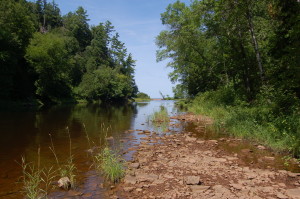 From here the path turns in and follows the river, mostly a well-worn flat path. It passes a powerhouse, then becomes more narrow as it gets rocky – the first view of the falls is great:

Getting in closer requires climbing on some rocks and following a curved shoreline of very loose rock – watch your footing, but the reward will be worth it. 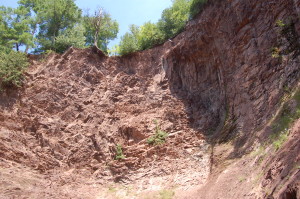 Up close, it is easy to see how the falls make their way down the cliff, dropping about 40 feet. A dam upstream strips them of much of their former power, at some point this river would have been a lot higher!

A big thanks to XCel Energy for keeping access to these falls open – we need more companies like them! This is a great spot to hang out for awhile, and I even managed to set my camera up on some rocks for a makeshift tripod:

As you can see from the picture at the top of the post, a trip back to this area in June 2013 showed a significant increase in water flow, which made getting back to this same spot impossible but made for some pretty nice pictures. In August of 2015 we were able to get back to the same spot with minimal effort – it appears to be a roll of the dice here as far as water levels are concerned, and that’s part of the fun!

Directions: From Ironwood, take US-2 west into Wisconsin and head north on Hwy. 122. Follow it north for a little over four miles, crossing back into Michigan. Look for a gravel road on the left marked with a sign for the falls shortly after crossing the river.