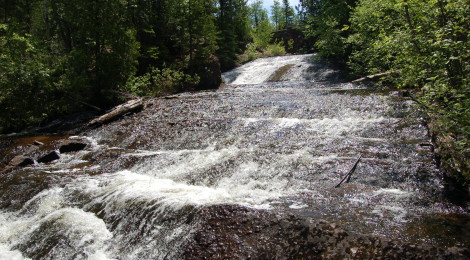 Silver River Falls – A Roadside Waterfall in the Keweenaw Peninsula 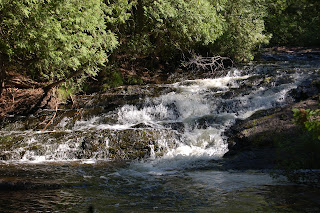 A trip to the Keweenaw Peninsula can easily include several waterfalls reached within less than five minutes’ work. One of the easiest waterfalls to get to is Silver River Falls, just north of Eagle Harbor near the intersection of M-26 and Brockway Mountain Drive. A small parking area is located on the south side of the road, and the trail begins on the north side. 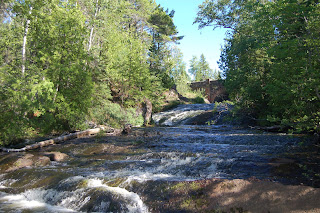 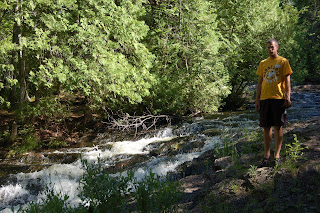 The path is well-worn and while it isn’t level it’s also not hard to traverse. It gradually works its way downhill, following the river and providing many short offshoot paths for better views. The river drops in a handful of sections as it slides down conglomerate rock before ending up calm at the bottom of the hill. The total drop here is around 20 feet, with the upper section having a sharper drop and the lower section winding at a more gradual pace. 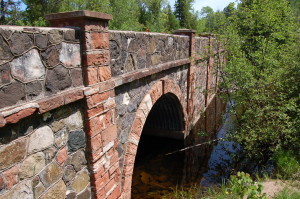 The bridge above the falls is made of sandstone and is quite impressive. A 1999 addition to the National Register of Historic Places, this bridge was built in 1930 and features a design similar to the one that crosses Cedar Creek in Eagle Harbor. The stone work on the bridge is incredibly detailed, which is rare among Michigan culvert bridges. 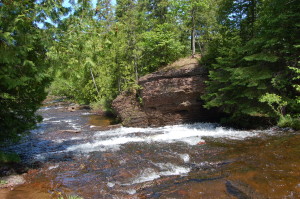 The view above is from the middle of the bridge looking downstream toward Lake Superior. Check out the video below from June 2012:

Directions: The Silver River crosses under M-26 about five miles east of Eagle Harbor, before M-26 makes a curve to the left and Brockway Mountain Dr. beings/ends on the right. Park here and carefully cross the street, then head down the steps on the other side to the river and falls.

Nearby waterfalls include Jacobs Falls near Eagle River, Eagle River Falls in Eagle River and Manganese Gorge Falls in Copper Harbor. Fort Wilkins, Brockway Mountain Scenic Drive and the Eagle Harbor Lighthouse can all be reached in 15 minutes or less as well.